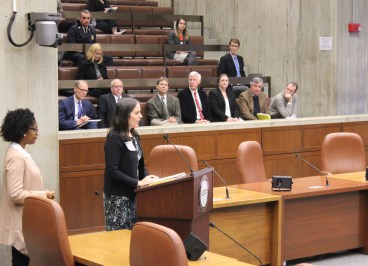 On Monday, November 9th, the Boston City Council held a public hearing on a proposal to update Boston’s Fire code so that the city’s public spaces could, in the future purchase, furniture that is free of toxic flame retardants. Under the current code schools, hospitals, universities, conference centers, libraries, theaters and other public spaces must use furniture that complies with a flammability standard called Technical Bulletin 133 (or TB133). This standard is a way of testing furniture before it’s sold to make sure that when exposed to flame in certain conditions it does not catch fire for a certain amount of time. In order to pass that test, furniture manufacturers usually need to add large amounts of flame retardants to the furniture.

The city is considering changing that standard and instead requiring a different standard, called TB117-2013. This newer standard can be met either using flame retardants or by constructing the furniture with less flammable materials. The state of Massachusetts has already adopted TB117-2013, so that means that universities, hospitals and other public spaces elsewhere in the state can choose flame retardant free furniture but those in Boston cannot.

An impressive group of people came out to testify in support of the change including a scientist, students, furniture manufacturers, a firefighter, public health advocates, mothers, and others. Here are excerpts from my testimony:

My name is Elizabeth Saunders, I am a resident of Dorchester (a neighborhood of Boston), and I am the Massachusetts Director of Clean Water Action. One of the hats that I wear in that role is the coordinator of the Alliance for a Healthy Tomorrow–a coalition of 100+ organizations in Massachusetts working to prevent harm to human health and the environment from toxic chemicals in consumer products and workplaces.

A core tenet of the Alliance for a Healthy Tomorrow’s work is that toxic chemicals should be replaced with safer alternatives wherever feasible. That replacement may take many forms. It could be a direct chemical substitute. It could be a different way of constructing the product, and in this case it could mean a different way of achieving fire safety in a room or building. I have deep respect for the responsibility borne by [Boston Fire] Commissioner Joe Finn and [Boston Firefighters Local 718] President Rich Paris, and I am grateful for the work of the members of the Boston Fire Department (BFD) and Local 718.

It is an impossible choice to choose between public safety and public health and we would not ask anyone, including the leaders of the BFD or the city council to make that choice.

Many other jurisdictions, including the state of Massachusetts, have evaluated this question and made the decision to adopt TB117-2013. However, just because everyone else is doing it is not reason enough for Boston to do it. We do believe that other cities and states that have made this issue have carefully considered the implications and determined that the change makes sense for both public safety and public health.

I hope that after the BFD and the City Council evaluate this question fully, taking into account all of the possible ways to achieve fire safety, that you will determine that a change from TB133 to TB117-2013 will be right for Boston.