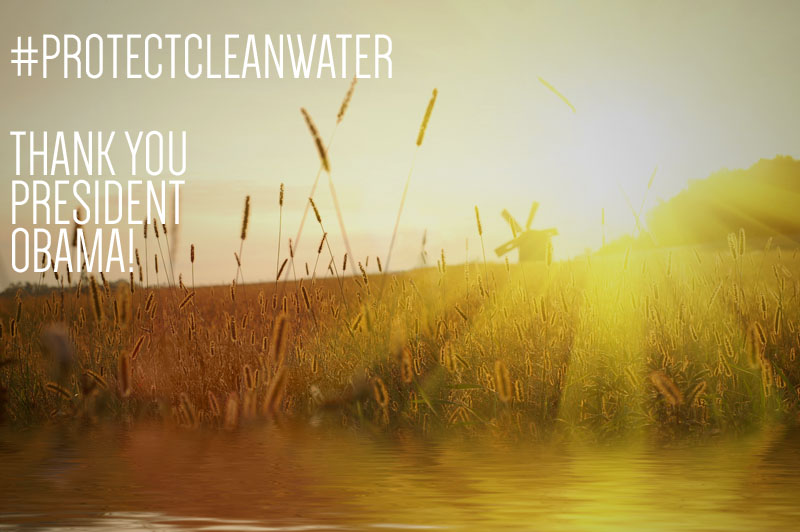 A Veto to Protect Clean Water

Despite massive popular support for the Clean Water Rule, Republicans in Congress have tried to stop it since the day it was proposed. They finally got enough votes in both Houses to get something to the President's desk - SJ Res 22, a "Resolution of Disapproval" under the Congress Review Act.

President Obama vetoed Congress' latest attempt to kill commonsense safeguards for our water last night. It seems like it took him all of 30 seconds to make the decision. This a huge win for anyone who cares about clean water. Thank the President here.

I love the veto - it's a powerful statement about a President's priorities. It is a tool that this President has rarely used. In the past hundred years only Warren Harding vetoed fewer bills. Despite working with a hostile Congress determined to undermine his agenda, President Obama only vetoes bills when he absolutely must. Last night was one of those times.

Unfortunately, it's not over. Even if this is the last attempt to kill the Clean Water Rule (a big if), the polluter-powered agenda will go after protections for streams from coal mining waste, the Clean Power Plan, the climate commitments we made in Paris and more. The majority in Congress and in too many in state legislatures and governors' mansions would rather carry water for polluters and big business than stand with their constituents.

It's time to focus on the elections. But I'm not talking about the Presidential election. While the race for President is super important (spoiler alert: every Democratic candidate will protect the Clean Water Rule. The Republicans...not so much), we need to pay much more attention to local, state, and Congressional races. Thirty-six states - governors and attorneys general - are wasting taxpayer time and resources suing to make it harder to protect streams and wetlands. States are protesting the Clean Power Plan and governors are telling state agencies to not comply with it. These actions have a huge impact on everyone and often a disproportionate impact on our most vulnerable communities - just look at the situation in Flint or the decision to stop retrofitting dirty diesel trucks at Port NYNJ.

We can elect a President who will continue the work President Obama started and take it even further.  But if we don't elect state legislators and Governors who will support action on climate and join us in the fight to protect clean water, we'll be right back where we started. If we don't change the dynamic in Congress, will fight the same battles in 2017 and 2018. So, the challenge for all of us is to find our who is running to represent us in City Hall and the State House and Senate. To find out where they stand on the climate and water and environmental justice. To make them understand the issues and the impacts that we have to address. And the hold them accountable when they are in office.

We'll be here to help. Over the next few months and into the summer we'll meet with candidates, review questionnaires, and make endorsements. Because 2016 matters, but so will 2018, 2020, and beyond.