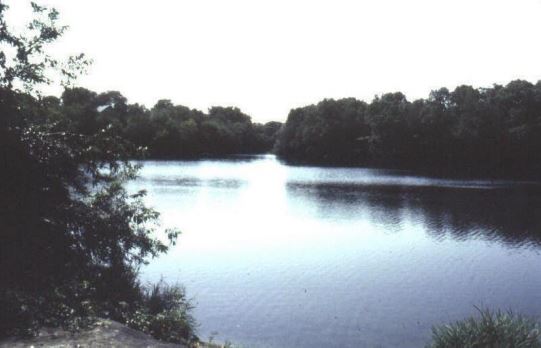 Our disconnect with water: Scott Pond and linking individual actions to the health of our waters

Not only should adults avoid contact with the water, it said, but so should pets. And children. It also advised against eating any fish taken from the pond. It then proceeded to list off a litany of potential side effects from contact with the algal-tainted waters: irritation of the skin, nose, and eyes, stomachache, nausea, vomiting, and diarrhea. Fun stuff.

Needless to say, town residents were not happy. The pond, while not known for being the healthiest body of water in Rhode Island, still regularly hosts significant recreational activities throughout the year - mostly boating and fishing (swimming hasn’t been recommended for a while). The comments sections of local media outlets highlighted a need for officials to “fix” the problem in order to open Scott Pond back up for activity. Others suggested ramped up enforcement in order to “apprehend the perpetrator.”

It is probably safe to say that a majority of Americans value clean water and the things we associate with it. In fact, a 2011 poll found that 79 percent of Americans were concerned about pollution to their drinking water supply and lakes, rivers, and streams. In addition, 77 percent worried a great deal about the maintenance and availability of fresh water for daily household needs. Given the situation in Flint, Michigan and the national exposure it has received, these numbers would most likely be much higher now.

And this concern is not without warrant. In the past year, we have seen a massive oil spill off the coast of California, runoff from a fire at a fertilizer plant in Pennsylvania kill thousands of fish and contaminate miles of river, two huge anoxic events in the Peconic River in Suffolk County, New York, one of the worst droughts in living memory to grip the American West, and of course the ongoing tragedy in Flint, Michigan.

But while we may show overwhelming concern for the long-term viability of this critical resource, most individuals don’t feel that we can really do anything about it.

It’s also probably safe to say that the majority of Americans - those of us that live in urban and suburban settings - almost certainly don’t think about how we individually contribute to water quality degradation.

And herein lies the disconnection with our waters. Other people pollute. Other people ruin it for the rest of us. Other people need to do something. As a whole, we don’t feel that our individual actions have anything to do with the quality of our rivers and streams, our drinking water supplies, or our estuaries and oceans. But our actions do matter, particularly when we are talking about the stormwater runoff that cause things like fish kills and shellfishing bans and beach closures and no contact orders like in the one for Scott Pond.

Whether we live in urban areas or in rural parts of the country, the runoff from our properties picks up the pet waste on our lawns, the pesticides and fertilizers in our gardens, and the oil and antifreeze spilled on our driveways. Rainwater no longer infiltrates into the ground where our new backyard patio now stands. The plastic bags and the plastic water bottles and the polystyrene clamshells that pollute our local streams were once dutifully placed into our recycling bin, but then the wind got a hold of them and blew them down the storm drain. It’s important to point out that in most cases, these things aren’t done out of malice. We just engage in these behaviors because we honestly don’t know any better - because we are entirely disconnected.

So how can we work towards finding a solution if we don’t feel there is a problem to begin with? How can we finally establish that connection? Public battles over how to best mitigate polluted runoff are being waged all across the country, and they highlight the public’s hesitance to accept the reality that we are all a little bit culpable for declining water quality, and likewise, to accept that we are all responsible for fixing the problem.

Scott Pond, and all the other Scott Ponds out there, will continue to degrade and be subject to health advisories if we continue to engage in behaviors that directly contribute to the problem. But even if we do stop, we haven’t entirely solved the problem. There will still be lots of work to be done to reverse the damage to our waters, but as any twelve-step program reminds us, the first step is admitting that we have a problem in the first place.