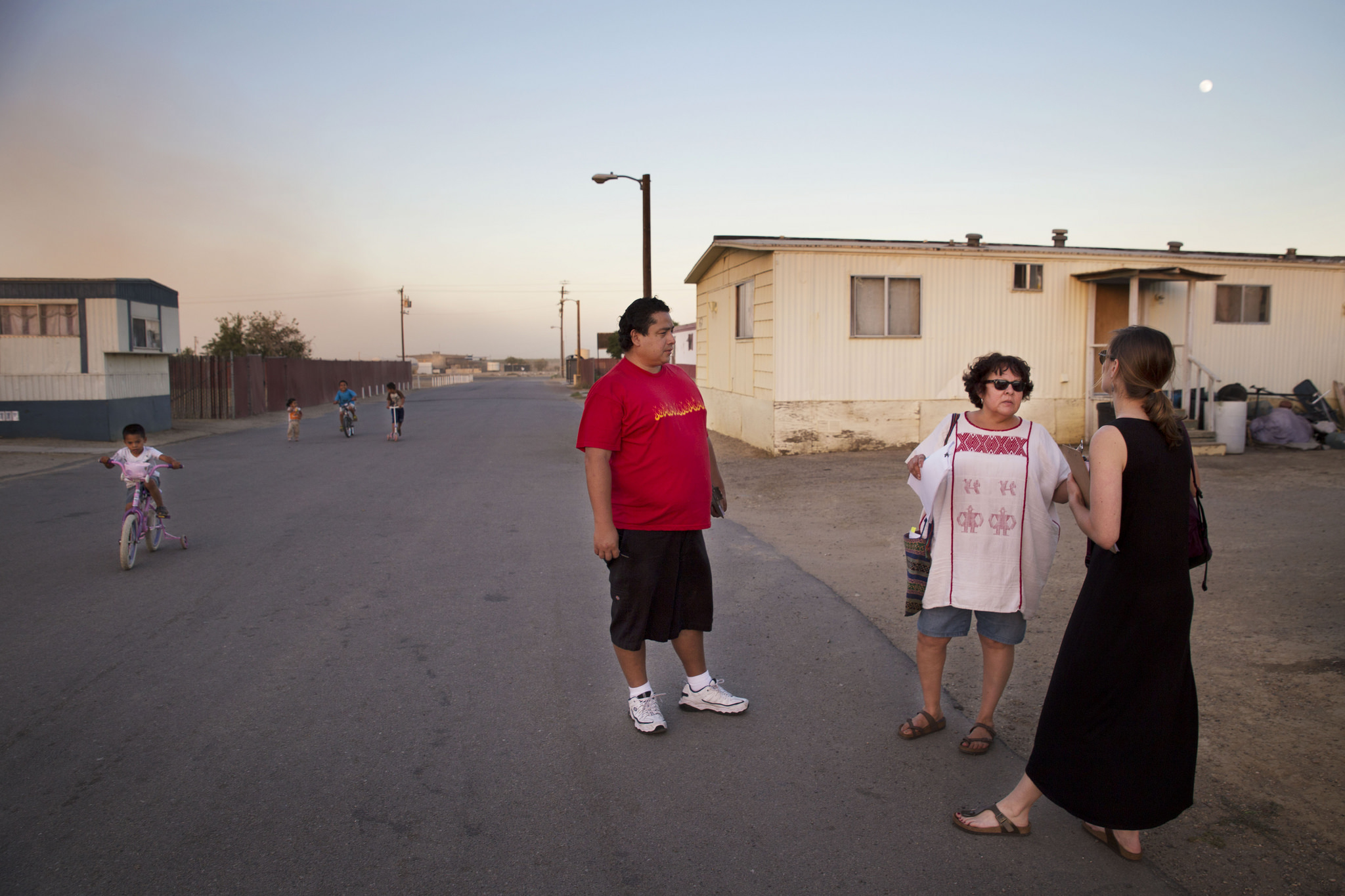 This blog is in response to David Brooks’ recent op-ed published in the New York Times on May 17, focused on improving the health and lives of residents in Lost Hills, California, a community in which I work with Clean Water Action. We submitted a letter to the editor to the paper in response to Mr. Brooks' article, but the editors chose not to publish it. Still, you might want to read Mr. Brooks' piece before you dive in, here.

Farming towns are towns with lots of farms around, whereas company towns are owned almost entirely by the town's major company.  The company provides infrastructure to enable workers to exist there. And Lost Hills, California is a company town, not a “farming town” as Mr. Brooks describes it.

I am a gerontologist who moved to Kern County to be an environmental organizer in a fence line community. Over the past 12 months I’ve led a collaborative team of community experts and colleagues from various disciplines in the first low-cost air monitoring feasibility study in a community like this. I invite residents to share their experiences as citizen scientists and researchers who live in the community. Together we explore potential health risks most often associated with oil & gas development, pesticides, air pollution and water contamination, so that they become catalysts of change and a solid resource for their family and friends.

We care about our health and our families' health. That's why we are very concerned about the quality of water used for irrigation of almonds, pistachios, cherries, citrus and root-type vegetables. We wonder about the so-called Lost Hills “lemonada” that flows from the kitchen faucets of residents. We drink water from five-gallon plastic jugs filled at the corner store water vending machine. Sometimes we check the “date of last service” posted on the side of the vending machine. Other times we don’t.

Our collaborative community experiment is a voluntary experience involving various sectors of the community of Lost Hills where leadership opportunities are there for the asking.

I avoid the intentional community instigation led by the owners of The Wonderful Company, which makes pistachios and almonds, referenced in glowing terms by Mr. Brooks in his article. The Wonderful Company is indeed trying to change the community from all directions at once.  But do the residents of Lost Hills need a new–and-improved company town?  I thought I might ask them.

I asked how many farm workers hit the gym at 4 a.m.to be at work by 6 a.m. like one man referenced as a success story in Mr. Brooks’s piece. One asked, shaking his head: “Why would anyone except maybe someone who sits in the office all day go to the gym at 4 a.m.?  Don’t they get enough exercise bending, stretching, sorting, picking, and packing for 10 hours a day?”

I also asked about the group medical visits for workers, referenced by Mr. Brooks in his article. One woman brushed away tears of laughter and said: “That’s how the staff can sit together in the workroom all day! They want everyone in a group. There is no privacy. No respect for confidential information.”

I get it.  I’ll even go so far as to say what The Wonderful Company is doing is worth learning from.  The question becomes, learning what? I have learned a lot in conversations with my neighbors, who care about their health and the health of those around them. In early 2015 I asked a group of 25 residents what is the one thing they would like answered about their community? They all gave the same answer: “Is the air we breathe making us sick?”

It’s generous of Linda and Stewart Resnick, friends of Mr. Brooks, and the owners of The Wonderful Company, to provide a housing project in collaboration with the Department of Agriculture, sidewalks, lights and gardens.  It’s fantastic that the project teamed up with the Kern County Department of Recreation to remodel the recreation center. But here's a secret from the residents of Lost Hills: They would have been over-the-moon if new pipes had been installed in the community to reduce the lead and corrosion impacting the existing infrastructure.

There’s much to learn living in a company town. Sometimes all you need to do is to listen.