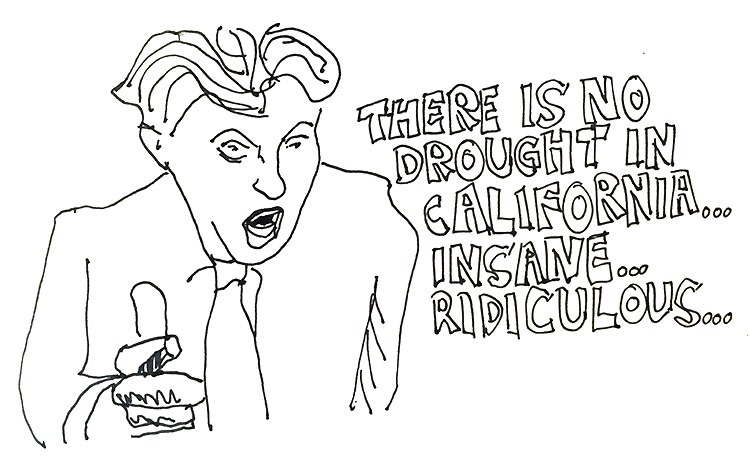 Last Friday in Fresno, Donald Trump, the presumptive Republican candidate for President in November, took on the California drought with his usual attention to detail and accuracy.

Speaking at a rally, Mr. Trump reportedly said it was "insane" and "ridiculous" to decribe California as having a "water problem."

Californians can see right through this statement. We know that the drought is real, and that we’re now entering a fifth year. The almost normal rainfall this winter in Northern California was not nearly enough to make up for the four dry years before it, or the lack of rainfall in Southern California.

We also know that we can only get through this drought through shared sacrifice: California residents have reduced their water use nearly 25% over the past year. Some farmers have also acted to reduce their water use; Delta farmers have voluntarily saved nearly 32% of their normal water use, even though they hold protected senior water rights. The environment has sacrificed as well, with estimates that nearly 20% of trees statewide are dead, and two years of salmon runs have been decimated. Our water problem may be “insane" and "ridiculous”, but the solution isn’t to drive California’s iconic salmon to extinction by eliminating flows out to the ocean altogether, or, as Mr. Trump described it, to entirely stop "taking the water and shoving it out to sea."

You’re a little late to that party, Mr. Trump. We think about water and drought all the time here in California. And we know that there’s no one answer or quick fix to the challenges posed by drought and by climate change, which is exacerbating the drought by hastening the Sierra snowmelt. Instead, we need to work on many fronts to reduce water use. That means working with farmers as well as with urban residents. We need to expand our water supplies through investments in sustainable alternatives like stormwater, groundwater and recycled water. And we must support and protect our unique and threatened environment, here in the state.

I’m happy to say that Mr. Trump got one fact right on Friday: “There are some great environmentalists and environmental people,” he said.

Yes. Californians know how lucky we are to live and work in such a beautiful and diverse corner of the world, and we understand our responsibility to keep it that way for future generations. I know you’re only looking towards November, Mr. Trump, but perhaps you could act more like the Californians you’re courting, and think about our longer-term future.