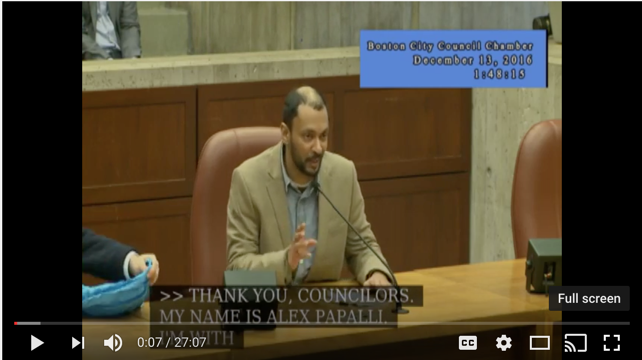 Boston, Time to Bring Your Own Bag

This past Tuesday, December 13, Boston City Council hosted a public hearing to address a proposed "bring your own bag" ordinance seeking to reduce waste from plastic bags. Unimaginable numbers of plastic bags are used daily, for an average of 12 minutes before they are discarded. Unfortunately, less than 5% of single-use plastic bags are in fact recycled. Many people do not know how to deal with plastic bags. Really the only option for consumers is a bin in the occasional grocery store. But, like I said, only 5% of these bags ever make it to a recycling center.

The other 95% of plastic bags end up in our streets, trees, rivers, and incinerators. When burned, plastic bag trash emits countless toxins into the air. Bags are mistaken by aquatic species as food and can kill whatever eats them. To create these wasteful plastic bags, fossil fuels are burned. The amount of petroleum used to produce 14 plastic bags could drive a car one mile. Plastic bags have not only become a nuisance for recycling companies, clogging machines and slowing down factory operations, but for the environment as a whole.

The proposed ordinance, offered by Councilors Matt O’Malley and Michelle Wu, would greatly reduce the number of plastic bags used in the City of Boston, banning single use plastic bags from being distributed in retail establishments and placing a 5 cents fee for any bag required by a customer at checkout. Additionally, any bag sold for 5 cents by the retail establishment must be reusable, recyclable, or compostable. It is the Councilors’ hope that the 5 cents incentive would encourage people to bring reusable plastic or cloth bags when they go shopping and thus eliminate a large contributor to plastic waste and pollution.

While many attendees were in support of the ordinance, some testifying expressed concern for the 5 cent charge’s impact on low-income communities and small businesses. However, in fact this ordinance simply makes the cost of bags visible, and allows consumers to opt out of paying for them, where they had to pay for bags automatically in the cost of whatever they were buying.  And Clean Water Action will continue to stress the economic benefits of Zero Waste, especially in neighborhoods like Roxbury and Dorchester that have been left out of previous economic development. Partners of ours like Cooperative Energy Recycling and Organics (CERO) are thriving in the green economy and recycling is creating jobs.

We also support efforts to deliver reusable bags to low-income communities who need them the most before and after a bag ban goes into effect. Additionally, reducing the number of plastic bags in our waste stream would lessen the amount of toxic fumes spewing from incinerators commonly located in low-income communities. Businesses are able to use reusable bags to increase publicity, and under this ordinance would receive the small fee collected from customers without their own bag. Most communities with a bag ban have reported no negative impacts to local businesses, and some businesses are thrilled with saving money from no longer ordering bags.

We were disappointed to hear that the Mayor Marty Walsh’s office is not in support of the bag ban, and believe this ordinance is a strong step in the right direction. Even while disagreeing on this particular legislation,  Environment Commissioner Carl Spector discussed the city's pathway toward achieving Zero Waste - an issue we've long urged Boston to take seriously. CWA is working behind the scenes with the City on a comprehensive overhaul of the waste system; progress on waste reduction is coming.

While there will be a continuing need to address the city’s waste production, delaying action will only exacerbate the problem. For more on CWA’s ordinance support, check out CWA’s own Alex Papali testifying in support of the ordinance.