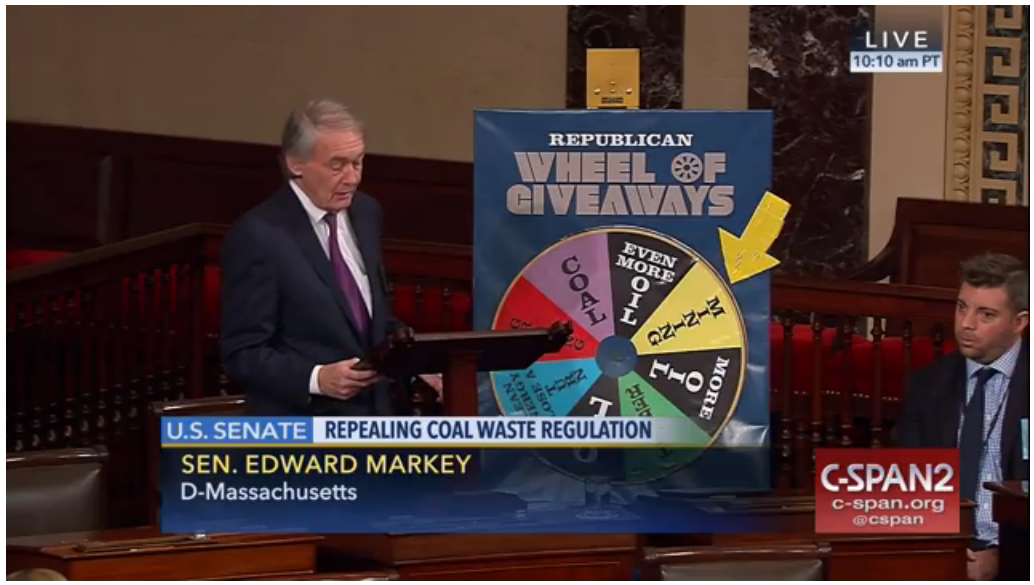 If the first month of the 115th Congress, and the first two weeks of the Trump Inc Regime, has taught us anything, it’s that the fossil fuel industry calls the shots. Not that this is new, but with a Republican controlled House, Senate and President, the top priority has been to give their friends in the oil, gas and coal industries everything they want.

Over in the executive branch, Trump used his first days in office to sign orders attempting to fast track the Dakota Access and Keystone XL Pipelines, and to eliminate regulations – longstanding wish list items for big polluters. He put former Exxon CEO, Rex Tillerson in the State Department, nominated Rick Perry a Dakota Access pipeline board member, for Department of Energy, and Scott Pruitt, who has joined with polluters to sue the EPA 14 times, to lead that very agency. Now, with the help of Congress President Trump is gearing up to sign a slew of anti-environment, fossil fuel industry handouts.

First up in Congress was the Regulations in Need of Scrutiny (REINS) Act, which the House passed - it's awaiting action in the Senate. It seeks to limit the ability of federal agencies to propose and finalize new safeguard, requiring Congressional approval for major rules. This bill would cripple agencies like the EPA, making it much more difficult to implement regulations to protect public health and the environment.

Next was the Midnight Rules Relief Act. This bill would allow Congress to throw out multiple protections at once under the Congressional Review Act (CRA), a rarely used tool that allow Congress to toss our regulations in the trash if they were finalized within the last six months. To make matters worse, the CRA also prohibits future “substantially similar” rules from being created. The CRA has been rarely used because it requires a new President to sign them into law, and a majority in both houses of Congress. Fortunately, this bill hasn’t moved in the Senate.

Then last week Congress starting Obama administration regulations under the CRA. There are plenty of potential rules to go after, from disabled worker protections, to paid sick days for federal workers, to nursing home protections. Congress started by hooking up their oil, gas and coal friends.

The first CRA resolution of disapproval, and first bill to pass both houses was the rollback of the Stream Protection Rule, which put sensible limits on dumping of coal mining waste in waterways, and tightened the monitoring and restoration of impacted streams, including many drinking water sources. The coal industry didn’t like it, so Congress got rid of it. After years of public process and hundreds of thousands of public comments, in one week Congress tossed the rule.

Next, the House and Senate quickly moved to gut an anti corruption rule for extractive industries, that requires disclosure to the Securities and Exchange Commission of payments to foreign governments. Exxon didn’t like this one, actively lobbied against it, so guess what, the second bill to make it to the President’s desk gets rid of it!

Next up, the House passed, and the Senate is set to take up the Bureau of Land Management’s rule to reduce intentional waste of gas produced on public lands. These commonsense regulations require companies to pay royalties on the gas they flare or vent. Both fiscally responsible, as well as climate and health friendly, these rules would have saved taxpayers $330 million a year and limited emissions of the potent greenhouse gas, methane. That regulation and those dollars have been sent up in flames. Another gift to oil and gas!

In the coming weeks, Congress will keep the handouts coming. With more CRA resolutions, they will likely go after safety regulations on oil drilling in the Arctic, chemical plant safety standards that impact the petrochemical industry, and a number of appliance efficiency standards.

The fossil fuel industry has always been the 800-pound gorilla in the room with our elected officials. We wrote about it  in this report last year. But they haven't had this much influence, maybe ever. With Republicans in control of Congress and the White House fossil fuel lobbyists are getting everything they want. It's not going to stop, unless we step up and stop it. And we can; because voters didn’t hand over the government to Big Polluters. They expect their elected officials to protect them, not profits for oil and gas companies. Americans overwhelmingly support protections for clean water and air, regardless of political party - and we are going to fight back.

Image: Senator Markey of MA, with a helpful visual aid, to keep track of who Congress is working for. Photo: C-Span