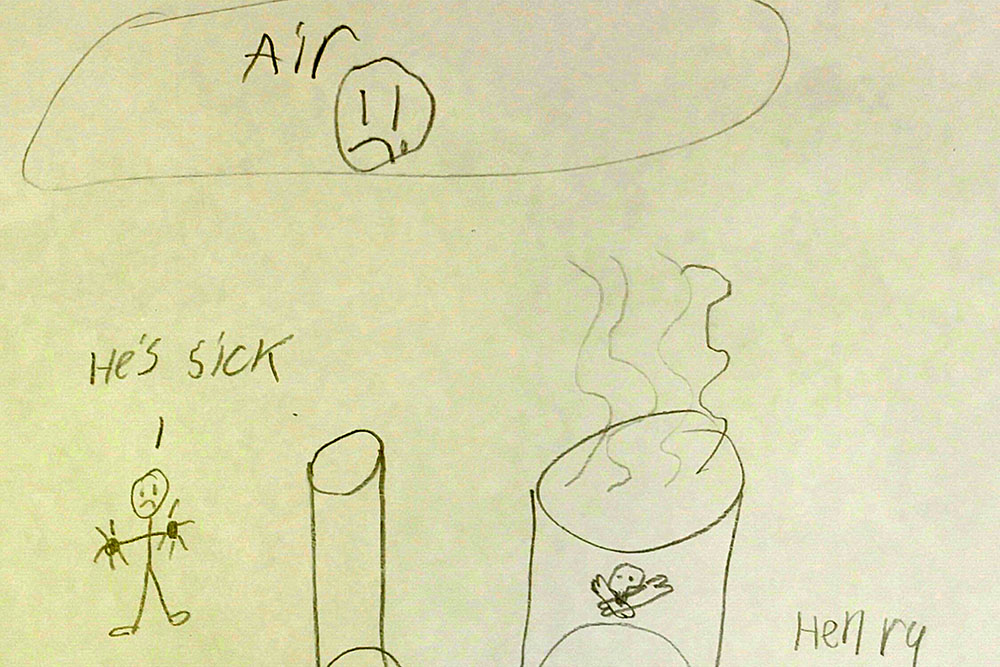 Yesterday, I delivered the following testimony to EPA, opposing their planned two-year stay on methane pollution limits. Take action on this issue today.

My name John Noel, and I work on national oil and gas issues for Clean Water Action. Clean Water Action, along with our allies, has been working on this campaign for over two years. We talked to thousands of people face to face in seven states. We explained the dangers of local air pollution and destabilizing nature of methane emissions and we’ve heard from folks who are directly impacted. They know that oil and gas companies have the technology right now that they can implement at relatively low costs. They know it’s in the best interest of all Americans if oil and gas companies take responsibility and operate with the necessary protections it takes to safeguard children’s health. Here are some pictures we collected from kids across the country.

In court documents the new EPA acknowledged that delaying this rule would "have a disproportionate effect on children." These are those children.

The rule was finalized a year ago. What has changed since then? Has the science behind the dangerous impacts of methane emissions and local air pollution become less clear? Did oil and gas companies not get their chance to submit comments and participate in the stakeholder process? Is living on the fence line of oil and gas development actually good for you now? If nothing substantive has emerged since the rule was finalized, what has actually changed?

The answer is access and influence of the industry. With Scott Pruitt in power the industry has a direct line to the decision maker. Just weeks after starting at EPA, Pruitt met with American Petroleum Institute Board of Directors at Trump hotel to discuss “regulations” and “oil and natural gas development.” There is little doubt that delaying the methane standard was discussed. Pruitt delivered shortly after.

How much courage does it take to ask one of the most profitable industries on the planet what they want and then give it to them? The answer is zero. It does, however, take courage and integrity to do what is right. To protect children’s health, even in the face of unprecedented pressure from those in the industry who do not care.

In an effort to distract from his blatant shilling for the industry, Pruitt uses terms like “EPA originalism” or “back to basics” or “rule of law.”  What is this guy talking about?

A former Senate Republican staffer, Thomas Jorling who co-authored the Clean Air Act in 1970 and the Clean Water Act in 1972 was interviewed about this new language and said, “It’s all basically a smokescreen to their real intention, which is kind of a moral and ethical corruption, to … restore the dependence of the United States energy system on fossil fuels.”

It’s important to note just how out of step the Scott Pruitt’s policies are with the rest of America. A recent Gallup poll indicated that 71 percent of Americans want the government to emphasize alternative energy. Fifty nine percent of Americans believe protection of the environment should be given priority over expanded fossil fuel development.

Sadly, it is not just Pruitt who is operating in the fringes. A large number of the new EPA political staff worked for Senator Jim InHofe — the guy who wrote the book “The Greatest Hoax: How the Global Warming Conspiracy Threatens Your Future.” How are we supposed to address serious issues, like methane pollution, if that is what the high level staff actually believes?

It is clear that Scott Pruitt is not here to solve problems or address pollution threats from an evolving oil and gas industry. The intent is to jam up the government.

In the words of renowned economist Jeffrey Sachs, Director of the Earth Institute at Columbia University, “They are taking the future of your children away for another few years of oil and gas profits. That’s all this is. The greed is unbelievable; it seems to have no limit at all. And we have to fight it.”

For these reasons, and more outlined in my written comments, Clean Water Action opposes any length of stay for the methane pollution standards.  This proposal is unauthorized, is unwarranted, and would be damaging to actual people, especially children living near oil and gas development.