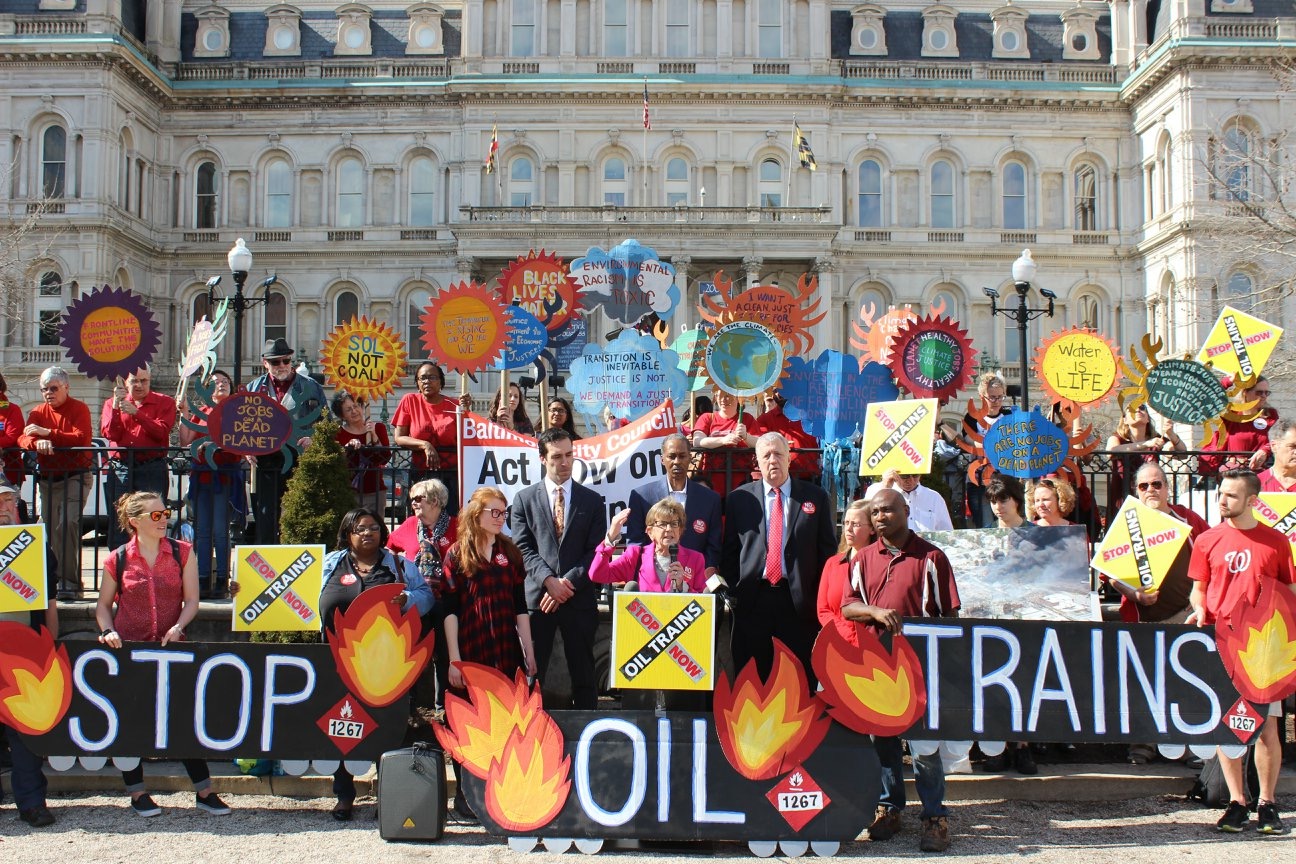 Huge news: last week, Mayor Pugh signed the Crude Oil Terminal Prohibition! Thousands of people all across Baltimore - and as far away as Frederick County and even Whatcom County, WA - have spoken out against these extreme fossil fuel methods that put Baltimore neighborhoods in danger. Here are some highlights from experts, workers, and community leaders whose voices helped make this victory possible.

These crude oil trains feed a fossil fuel-based economy that is pouring heat-trapping pollution into our atmosphere and damaging our climate. Fossil fuel infrastructure perpetuates a moral crisis on a global scale. People of faith — and all people of good will — are called to shift, now, to clean energy. Continuing to rely on fossil fuels only accelerates the flooding, stronger storms, disease and drought already causing untold suffering as our climate changes. It is the most vulnerable people, in our own communities and around the world, who are among the first to suffer the consequences of climate change. On Wednesday, as I deliver that message from my clergy colleagues, we’ll be speaking out together to reject expansion of fossil fuel transport or infrastructure. Any terminal that continues to enable the burning of fossil fuels is to us a “dangerous object.”

Rabbi Daniel Burg of Beth Am Synagogue, located within the blast zone, writing on behalf of himself and over 50 other faith organizations in Baltimore. In the Baltimore Sun.

My neighbors and I in the lower South Baltimore neighborhoods need the City Council to give us their word and protect us from crude oil terminals from moving into our neighborhoods. I and other community leaders contribute countless hours of our personal time in order to dismantle the poor and industrially dangerous living conditions and environmental stresses that we have to live with. We will no longer serve as the environmental and industrial “wasteland” for Baltimore City. We are looking to City Hall for leadership by moving this bill forward and ask council members of the Land Use & Transportation Committee to do the same.

Keisha Allen, president of the Westport Neighborhood Association, one of the many neighborhoods in Baltimore where people live just yards from the railroad tracks. In the Baltimore Brew.

Although pipelines spill more gallons per incident, crude-by-rail spills have had more devastating impacts, as the rail lines often run near rivers or through densely populated areas. While recent data show that the amount of crude oil shipped by railroad has decreased from the 2014 peak, it’s expected to rise again due to changing demand, and especially with the establishment of new terminals. I strongly believe the Baltimore City Council should consider the explosiveness and health risks of Canadian crude oil from the tar sands.There is a great amount of it flowing in our rail network, but there have been almost no studies done on its impacts.

Sauleh Siddiqui, co-director of the Center for Systems Science and Engineering at the Whiting School of Engineering at Johns Hopkins University. In the Baltimore Sun.

I live in Ijamsville in Frederick County, a town linked to Baltimore by a freight rail line. If a new crude oil terminal were built in Baltimore, the trains supplying it would go through my community first, and we wouldn’t have any way to protect ourselves. ... Baltimore, please stand up for the counties that don't have a voice and use your authority to ban crude oil terminals. The rest of Maryland is counting on you.

Veronica Poklemba, resident of Ijamsville in Frederick County. In the Baltimore Sun.

Now is the time for the city to say a clear “no” to expanded fossil fuel development and fight to make sure that offshore wind comes to Maryland instead. These are the jobs and industries that will build Baltimore’s future, not the fossil fuel infrastructure of the past. If the fossil fuel industry were to expand crude oil terminals in Baltimore, they would threaten the city’s future economic viability. More crude oil terminals would commit the city to an economic course that will deny people here sustainable work and safety into the future, as well as obstruct opportunities to use our land and resources in a more constructive way. We can return Baltimore to prosperity, but not by trying to bring back the polluting industries of the past – instead we should look forward and develop a 21st century vision for the city.

To uphold our commitments in the U.S. Climate Alliance and ensure that Maryland does not miss out on the renewable energy economy, it is imperative to stop expanding fossil fuel infrastructure and instead redirect investment to greener alternatives. Luckily for Baltimoreans, our local leaders understand this necessity. Recently, the City Council voted overwhelmingly to advance a bill prohibiting the expansion of crude oil terminals in Baltimore. Like Governor Hogan, opponents of the bill asserted — without evidence — that it would lead to job losses at the Port of Baltimore, ignoring the studies that show that fossil fuel investment generates fewer jobs per dollar than renewable energy like wind and solar. Because renewable energy sources are typically generated nearby, they add millions of dollars to the local economy.

The derailment of four CSX cars into the Susquehanna River during Friday’s wind storm is just the latest example of the risks inherent in transporting hazardous cargo by rail. Thankfully, none of the four cars involved in Friday night’s derailment were carrying hazardous materials. If they had, they could have released toxins right at the mouth of the Chesapeake Bay. No matter how many oysters are planted in the bay, that’s one mess they wouldn’t be able to clean up. ... Thankfully, there are steps we can take to prevent the likelihood of rail incidents involving hazardous materials such as crude oil. Our City Council recognized this last week when they gave preliminary approval to a bill that would ban new crude oil terminals in the city.

Matt Peterson, environmental advocate who works in the blast zone. In the Baltimore Sun.

This bill is a very important step to protect me and my neighbors in various neighborhoods in the city from increased crude oil by rail traffic moving through where we live and being built in neighborhoods with residents living nearby that still have a high amount of heavy industrial zoned properties. In February 2016, Marilaine Savard traveled from Lac-Megantic, Quebec to Baltimore to speak about her experience surviving the crude oil train derailment there three years before that killed 47 people. Before the event, she visited me and a few of my neighbors in Westport and was shocked to see a sharp curve in the railroad tracks that wraps around half of my neighborhood located very close to people’s homes — just like the one where the crude oil train derailed in her town. ... I am glad the City Council and my council member, Edward Reisinger, understand this, and I hope that Mayor Catherine Pugh signs this bill so that Westport and other Baltimore neighborhoods such as Curtis Bay, Mount Winans, Bolton Hill, and downtown do not become the next Lac-Megantic.

Keisha Allen, president of the Westport Neighborhood Association, one of the many neighborhoods in Baltimore where people live just yards from the railroad tracks. In the Baltimore Sun.