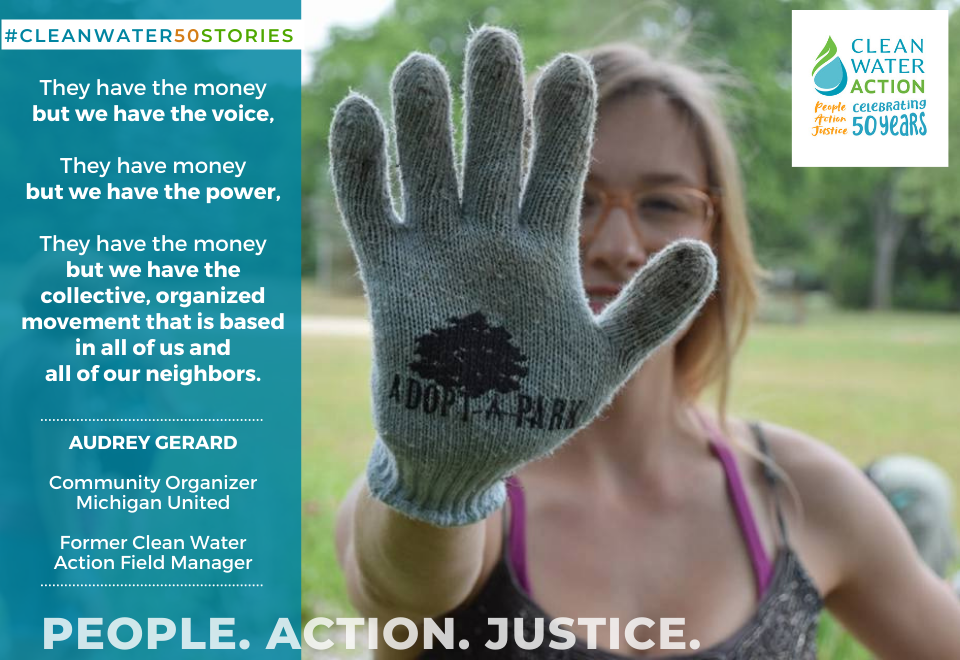 To celebrate Clean Water Action's 50th anniversary, we’re sharing our history and journey with the people who have joined us along the way as we worked to protect clean water through #CleanWater50Stories. Audrey Gerard worked in our Ann Arbor, Michigan office as a canvasser and field manager from 2015 to 2018 and now works as a Organizer for Michigan United. Audrey shared memories and thoughts on her time at Clean Water Action - the beginning of her career as an activist and advocate - and the lasting impacts and lessons learned - in an interview with former coworker Jen Schlicht.

Our canvass offices across the country are now hiring - apply here!

How did you start at Clean Water?

I started at Clean Water Action in September of 2015. I was a teenager, and I was bushy-tailed and bright-eyed and really passionate about the Great Lakes State that I grew up in. I saw a job posting for "Protecting the Great Lakes”. This sounded like my dream job and it really did open the doors to organizing for me.

What were some of the favorite campaigns you worked on?

Some of the favorite campaigns that I did had to do with giant actions that accompanied knocking on doors. We would have lobby days and go to Lansing to drop off letters that constituents throughout Southeast Michigan had written - boxes and boxes to our representatives. 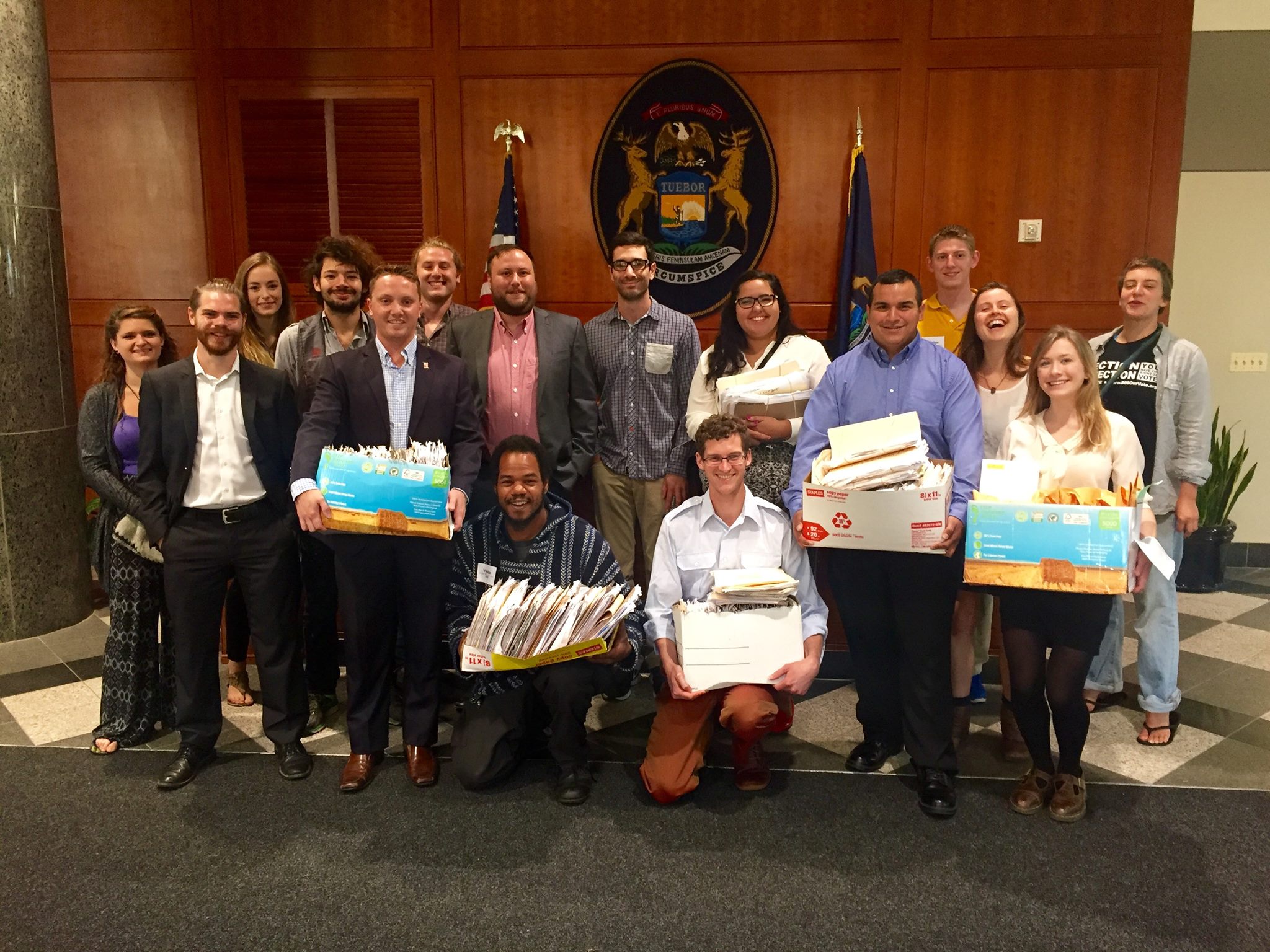 Two of the most memorable campaigns were fighting to allocate funds towards the Flint Water Crisis, working alongside Flint Rising to make sure the alignment was directly with what the people of Flint actually needed and wanted. The other was the fight to decommission Enbridge Line 5, opening eyes to what was happening in one of the largest freshwater sources in the world. Just seeing the shock on people's faces, children, adults, teenagers - everyone - when having these conversations for the first time. 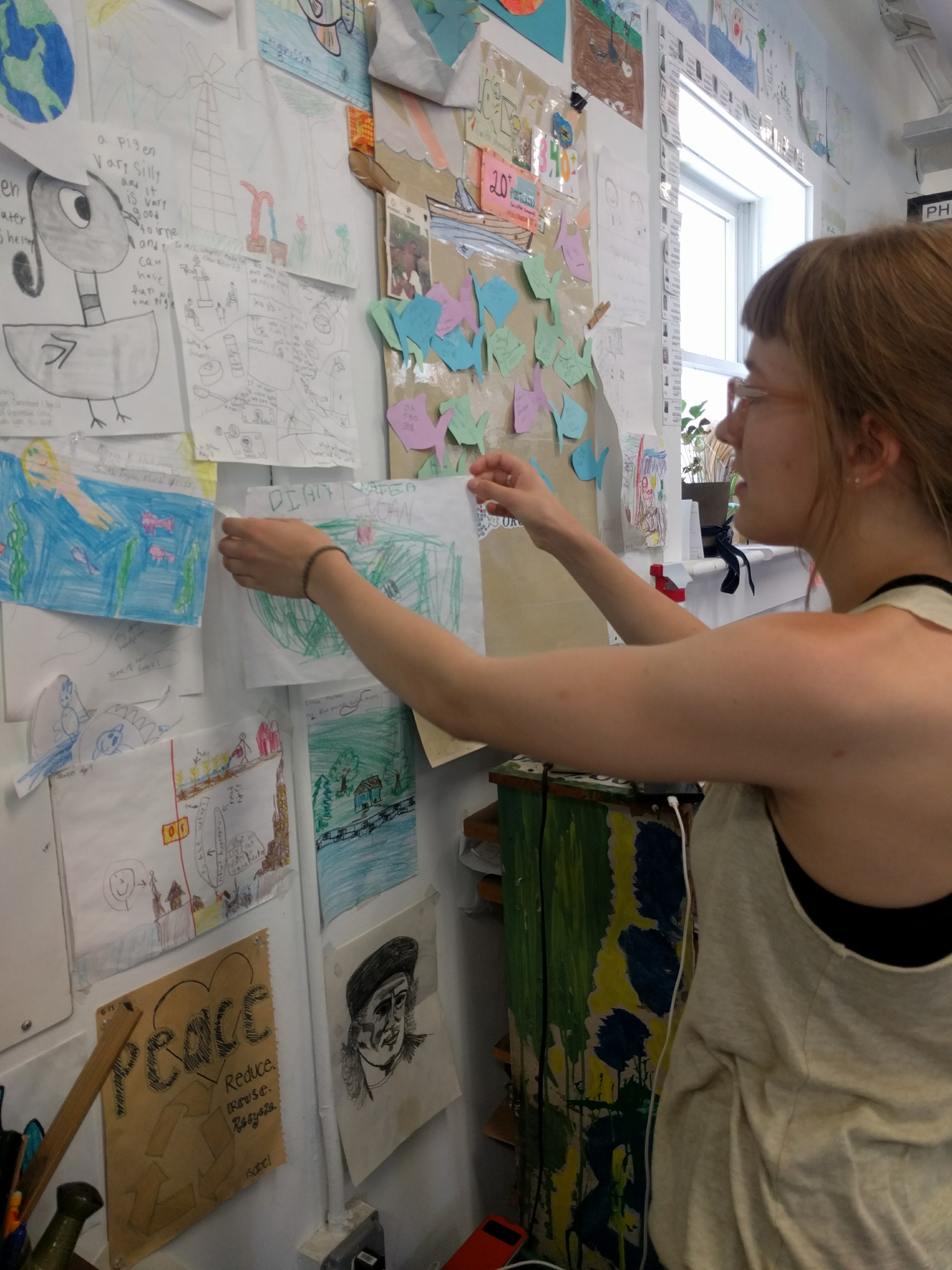 You worked as a canvasser and a field manager - what do you think was most effective about the work that you did talking to Michiganders on these big issues?

I think the most effective thing I learned was that you have to look for the supporters, and that there's more support out there then not. I really learned from those first couple years that comments from non-supporters need to roll off of you like a raindrop off an umbrella. And that's one thing that I always said to my trainees when I was a Field Manager - if people say something a little off-putting about the work that you're doing, just let those comments roll off of you, take a deep breath, and move on to the next door. Because those next conversations will make all the difference.

What's your favorite memory of working with your coworkers at Clean Water Action?

What would you tell someone looking for a job right now who wants to work on issues like protecting our water, our environment, our climate about your experience of working with Clean Water Action?

Lean in, be courageous, always ask questions - no such thing as too many questions - and this will be some of the most transformational months or years of your life and hopefully will define you as an organizer.

What have you been doing since you left Clean Water Action, and how did your experience here influence where you've gone since?

Clean Water Action was just the first step on a wonderful journey of organizing. Since then, I've worked on multiple campaigns. Some of the most memorable - in 2018 passing same day voter registration which I think has radically transformed the way we have been able to vote in Michigan moving forward. The other things that I've worked on have been around the environment - up until now working on legislation for home solar for the whole state of Michigan, a really viable route moving forward.

I just had my 2 year anniversary at Michigan United, which is a lovely progressive organization who has worked alongside Clean Water Action with different things over the years, and I run a statewide health care campaign on expanding Medicaid and Medicare and putting care over cost. I think that a lot of the tools in my toolbelt that I learned from Clean Water Action have pushed me forward through my life as an organizer. I owe a lot of that to Clean Water because there were really great women in leadership - Jen, yourself, as well as [Ann Arbor Canvass Director] Emily Woodcock - you both really believed in me like at a moment when I didn't really believe in myself. I was 17 when I started and it was like - you know, you're a teenager, you don't know a lot about the world. So I owe a lot of my growth to you all.

Some of my best friends I've met through Clean Water Action. You make friends and those friends stick with you for a lifetime for sure.

Why do you care about clean water? 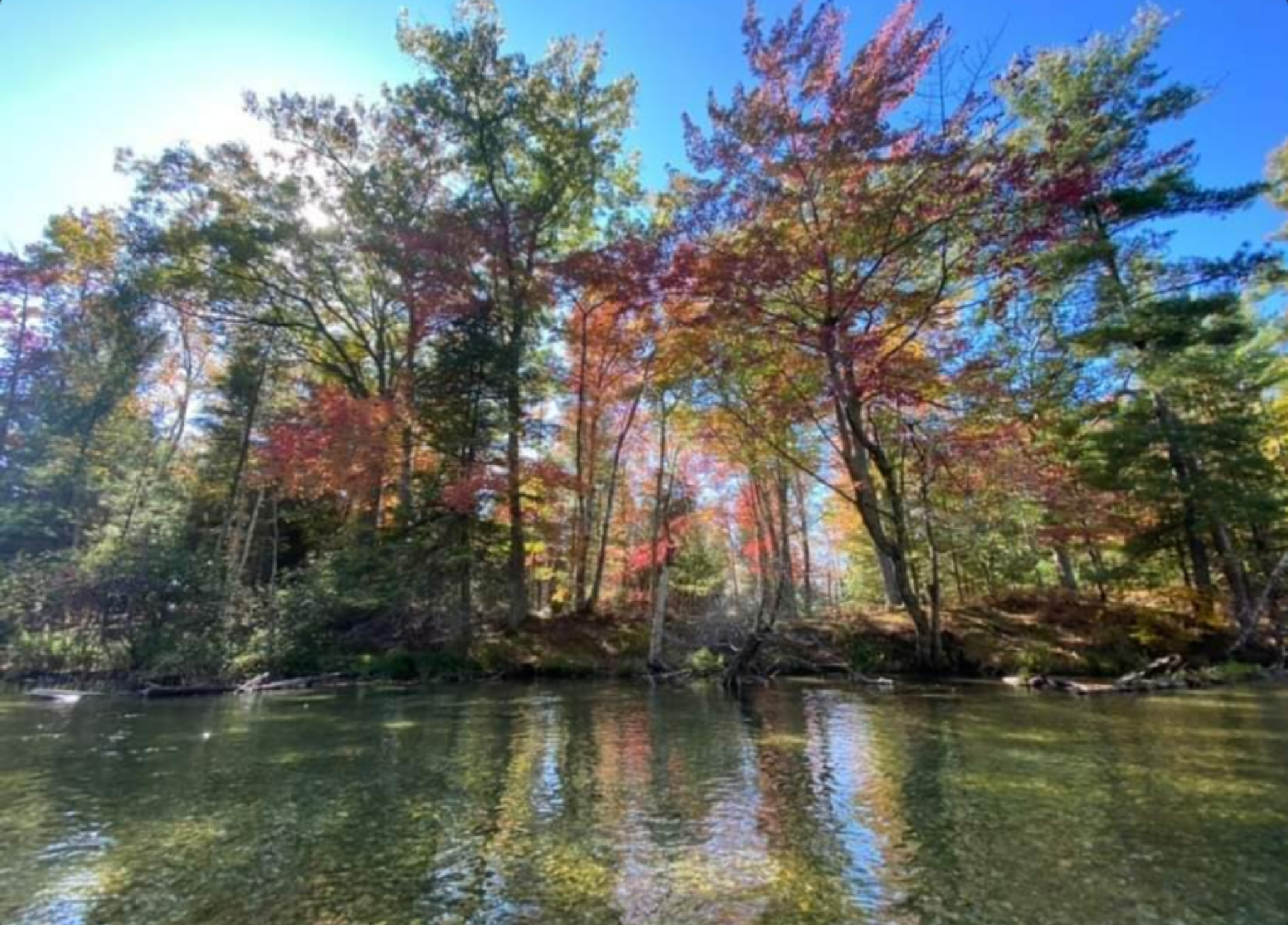 Our movement has had great victories but they don’t always come easy - like we used to say canvassing, if there was nothing we needed to fight for, we wouldn't need to be out there. For people frustrated at the pace of progress - knowing we need to move faster on climate, do more to protect our water, achieve environmental justice for frontline communities - what advice would you give to keep fighting the good fight?

That question gave me goosebumps because there have been so many times in the past 10 years that I've wanted to step away from this work but something always calls me back, and I think it's the collective leaning on one another when we really need support. It's that turf talk at the van before you go out and knock on doors and the sharing of a wonderful story at the end of the night. Hearing the words of people who I'm walking alongside, walking behind, who will continue walking in this path to fight for everything - clean air, water, environment - I know that my struggles are not individual to myself. And that if I share whatever tension I'm having at the moment with another organizer, they'll have a similar story and we can relate and help each other.

One thing I remember is the worry stone - someone taught me that in my first couple months of organizing with Clean Water Action. You pick up a stone on turf, you carry that stone with you for the 5 hours that you're out, and at the end of the night you set the stone back on your turf. It's just one way to be super mindful about taking things as they are, where they are, what's happening directly in front of you - and setting it down and leaving it behind knowing you gave it your all for that night and for that fight. Sometimes you have to put stuff away for a moment and revisit it later, and you usually do, because eventually you return.

Why would you tell someone they should support Clean Water Action and the work that we do as we reach the end of 5 decades and look forward to the next 50 years?

We are the collective voice. We don't discriminate when we go to turf, we hear from all people from all backgrounds, and we all know that this fight needs all of us and nobody is left out. Everyone is invited to the table and that's one thing that we're doing when we're knocking on every single person's door is we're having those conversations with all those people for the majority of each year. And it's a really lovely thing, for sure. 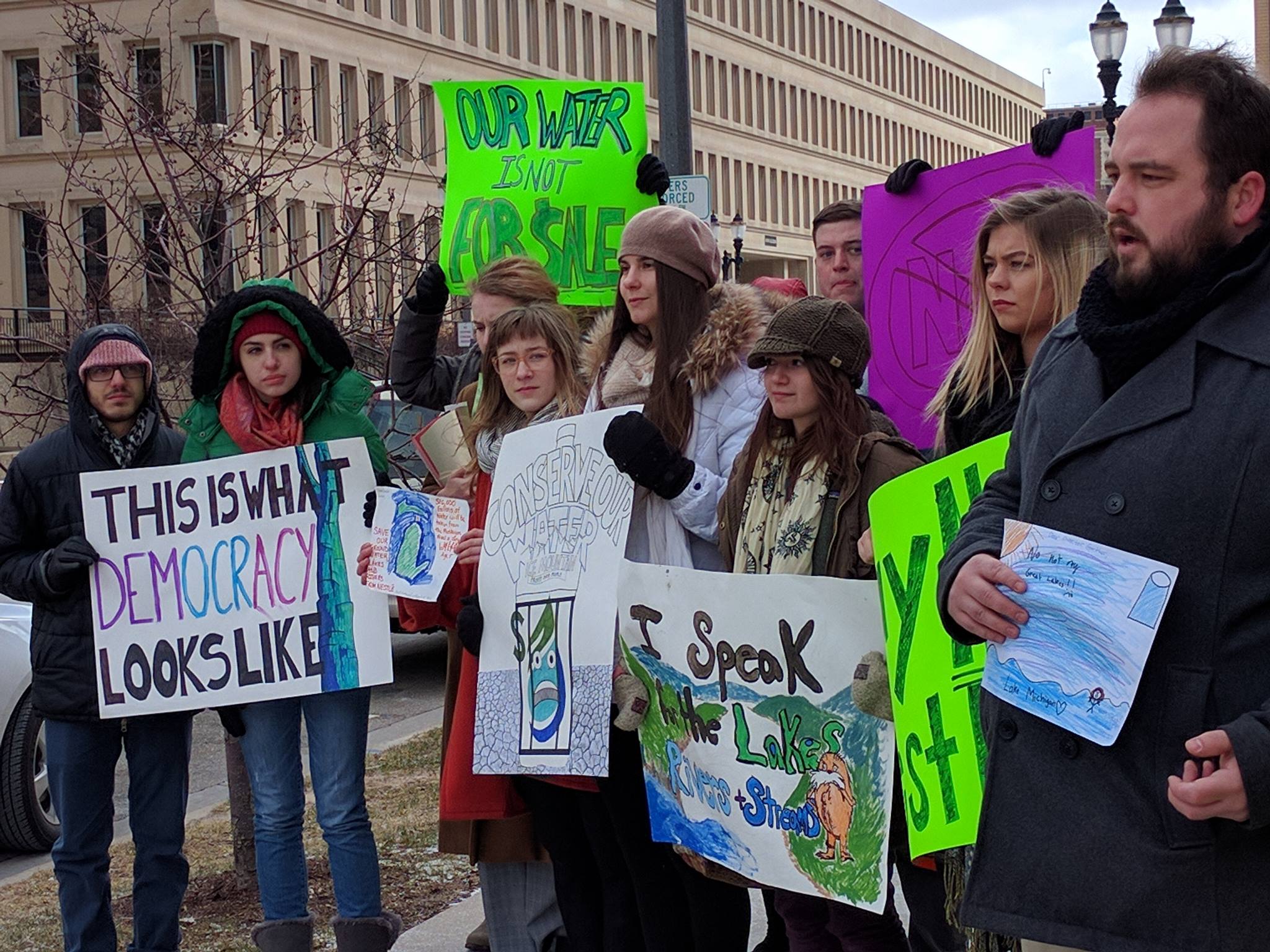 What's one of the most fun memories you have about your time at Clean Water?

One of the funniest things I remember is this one time after our shift it had just snowed maybe a foot and a half, and all of us started diving into the snow. Getting the funniest stuff for lunch - I can't believe there was a time in my life where every morning I drank an energy drink and ate a muffin and knocked on doors for multiple hours. I can't believe that time in my life existed but that was the canvasser culture. That was a fun job, it didn't feel like work a lot.

It was literally I think the coolest thing that had ever happened to me at that point in my life - to think that you could actually work to do things that you love to do and that were within your values. It blows my mind that I still get to do the work that I'm doing, it's such a privilege.

Just my encouragement to anyone who's applying to Clean Water Action is - go into it with an open mind and seriously lean in. Know that if ever have to leave or when you leave Clean Water Action there's always going to be a little space in your heart for it. Those experiences you might not realize are going to shift or alter the way you perceive the world around you, but just know that these are some of the most special times. Enjoy those moments.