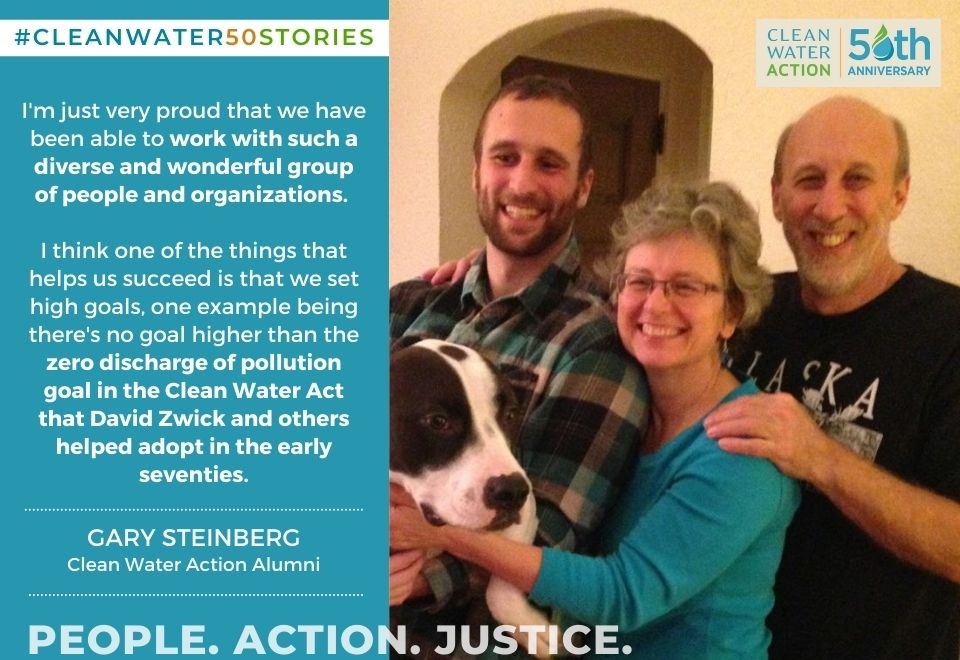 In honor of Clean Water Action's 50th birthday, we are lifting up voices and stories in the Clean Water movement through #CleanWater50Stories. Our story is the story of everyday people who have used their power to make a difference to create a healthier and greener future for all.

Meet Gary Steinberg! In the late 70's Gary was tasked with the mission to develop the art and science of Clean Water Action's professional fundraising door to door and phone canvass. Gary brought a laser like focus, undaunted effort, and humor to the task. With Gary at the helm, Clean Water Action was able to build and maintain a large membership, raise millions of dollars, and mobilize the civic voice across the country. And it wasn’t just about Clean Water Action -- Gary shared the canvass model with multiple social justice, economic justice, electoral, and environmental organizations. Much of Gary's foundational imprint still exists today and we continue to build on that foundation moving into the next 50 years.

What is your connection to Clean Water Action?

Hello, Clean Water nation. This is Gary Steinberg. I have my old school Clean Water T-shirt on here. That was one fun time. In the long history I had with Clean Water Action - I was a canvasser, a local organizer, and researcher. I was the person that led the development of the canvass from one crew of people in Washington, DC, with five folks going out in the winter to eventually 40 offices and a thousand staff, people reaching millions of people around the country for Clean Water allied organizations. And I'm currently still doing one of the things that brought me to Clean Water and that I love, which is kayaking and spending a lot of time in nature, including I work part-time with the Maryland park service as a kayak instructor, a kayak tour leader, and a naturalist. And that's a lot of what brought me to Clean Water in the process of running rivers and doing some geology.

I saw places that were magical and beautiful, and I saw places that were extremely polluted to the detriment of the environment. And also the people that live there in one story, which turned out to be a success for the Clean Water Act was on the North Branch of the Potomac river, about 150 miles west of here. The Potomac at that time was beautiful and clean in the South Branch, lots of fish, lots of people that lived close to the water there and had a high quality of life where it just over one mountain Ridge to the north on the North Branch Potomac, the water was so acid polluted that nothing lived in it and the air was so polluted from a pulp mill that it smelled like rotten eggs from miles away. And people had to live right there with the polluted water and the odor and the pollution coming from the pulp mill.

What are some of your favorite Clean Water memories or stories?

I'm happy to say that fast forward, many years later, as a result of the Clean Water Act, that Clean Water Action worked with and strengthened over the years, the North Branch is now a clean stream. And one illustration of that is that our own Chris Bathurst, expert trout angler, a couple of years ago, caught trout in the North Branch and trout just like clean water. They gotta have clean water. And so I just appreciate Clean Water's work on the North Branch and in many other places around the country that's helped improve the quality of the environment and the quality of people's life in those places. And when I came to work with Clean Water and first met Dave Zwick - his vision that we could make democracy work to protect our people, to protect the planet, and to create a more just world - really resonated with me. Thinking about that story on the Potomac river and other places - the problem was that polluters had too much power and people didn't have enough power and that we could change that by reaching out to people in key places around the country and make things better.

One thing I love about Clean Water is the people that I was privileged to work with and to share my life with over the years. And it is really a great fortune to work with people who share your values and do work that you both deeply believe in. One thing that resulted from that was a collaboration with sister organizations. And one of the sister organizations was also doing, organizing using door to door canvasing, where I was so lucky to meet my wife Liz. And so that's a very fond memory obviously, and a wonderful thing. And there just so many people and organizations that we got to work with, and I think it speaks to Clean Water's values and strategy as an organization that starting with Dave Zwick and following many other people I got to work with that clean water has been an organization that plays well with others and we've developed campaigns and capacity, and one on important issues for people not only as clean water, but with the League of Conservation Voters, the California League of Conservation Voters, labor allies at Working America and AFL CIO.
And I'm just very proud that we have been able to work with such a diverse and wonderful number of people and organizations. And I think one of the things that helps us succeed is that we set high goals, one example being there's no goal higher than the zero discharge of pollution goal in the Clean Water Act that David Zwick and others helped adopt in the early seventies. And that in looking to reach those high goals, we do the hard analysis and have the kind of strategy and tactics that enable us to win. And that we have the courage of our convictions. One example of that is in my local area here, when in 2003, the entire environmental movement was endorsing the Republican Connie, more the incumbent member of Congress in this area. And she was okay, and for a Republican, pretty good and by today's standards phenomenally good.
However, this is a very progressive district and we knew that people here would support someone that could be even better. And so we bucked the conventional's thinking, we supported Chris van Holland for Congress, and he won in large parts thanks to our grassroots effort. And obviously went on to do a lot of good things is currently the Senator from Maryland. And I'm proud that in many places around the country, that we had the kind of analysis we knew how to count. We knew how to get to 50% plus one to win an election. And it's made a real difference in the quality of people's lives and environment all over the country. And so I'm excited that clean water will celebrate this 50th anniversary, keep doing wonderful, work all over the country and wish everyone the very best take care.
A message from Gary Steinberg to Clean Water Action: I'm very fortunate to have had a career with Clean Water consistent with my values working with wonderful people and organizations. I want to give a shout out to a few folks, while also saying that there's not nearly enough space to mention everyone I'd like to.
My life partner and true love Liz Blackburn, who I met through Clean Water's work with allies. David Zwick, Sophie Ann Aoki, Chris Bathurst, Mare Carbone, Meg Haenn, Sarah Randolph, Bob Wendelgass, Peggy Ladner, John Tresize, Todd Speight, Dave Engledow, Micci Martinez, Barbara Helmick, Michael Blanch, Lynn Thorpe, Kathy Aterno, J Gary Dropcho, Paul Schwartz, John Kabler, Andy Fellows, Andrew Grinberg, Billy Goldsmith, Susan Gobreski, Louis Perkins, Carmi McLean, Bruce Livingston, Curt Moultine, Don Wolcott, Mike Petersen, David Grubb, Carl Pope, Lucy Blake, Marian Edey, Mike Podhorzer, Karen Nussbaum, Heather Booth, Dru Schmidt & Patty Snee. And many more folks whom I deeply appreciate. I hope you know.
50 Years of Action for Clean Water is Worth Celebrating! Share your Clean Water Story here. Join us at our National 50th Anniversary Celebration & Wine Tasting (Virtual Event!) on October 19th - RSVP here.