In early August, Tribar Manufacturing overrode their own alarm systems 460 times, and dumped thousands of gallons of effluent containing hexavalent chromium. This dangerous chemical spill eventually made it into the Huron River. Luckily, the water treatment plant caught most of the chemicals, however, this was a very close call. This incident is yet another example of why Michigan lawmakers need to get serious about holding corporate polluters accountable.

Right now, we have more than 24,000 contaminated sites across the state and that number grows with each passing year. The main reason for this is very simple - for many large corporations, it is cheaper to pollute than it is to clean up their act. Instead of holding polluting corporations accountable for the damage they cause, Michigan taxpayers often end up footing the bill to clean up their messes. If we want to change this equation, Michigan must pass laws like House Bill 4314, which would restore our polluter pay law and provide a powerful incentive for corporations to stop harmful polluting practices.

For years, Clean Water Action has been helping to lead the fight to restore our polluter pay laws and ensure that polluting corporations are held accountable. In nearly every legislative term, polluter pay bills are introduced, yet our gerrymandered legislative majorities generally don’t even allow hearings on these bills. The Michigan GOP has held a majority in the Michigan State House and Senate for far too long due to gerrymandering, and they are blocking progress on this critical issue. This November, voters can make a very clear statement by supporting candidates who will fight to hold corporations like Tribar Manufacturing accountable.

The midterm election is just a few weeks away, and the stakes are high. After a challenging two years, Michigan voters will return to the ballot box to make their voices heard — and they are clear that they have an awful lot to say. Once again, all eyes are on Michigan, as the battle for newly drawn Congressional, State Senate and State House districts are up for grabs post redistricting. With only 13 Congressional seats, down from 14 after the census, candidates are fighting to hold (or flip) the Michigan Congressional delegation. Democrats hoping to pick up a key seat in West Michigan, formerly held by Peter Meijer. Michigan’s 3rd Congressional district is a race to keep your eye on — where Clean Water Action endorsed candidate Hilary Scholten is battling the “Big Lie” Trump-backed candidate John Gibbs. In mid-Michigan, incumbent Elissa Slotkin will face-off against conservative State Senator Tom Barrett.

One thing is certain, the majority in Congress delivered for the people over the past two years, injecting billions of dollars into Michigan to help bolster its post-Covid recovery. Additional billions were allocated to lead service line replacement, water infrastructure upgrades, septic system overhauls, storm and waste-water management, Great Lakes restoration, climate resilience programs, electric vehicle manufacturing and clean energy jobs. All of Clean Water Action’s endorsed candidates for Congress support investments that protect our drinking water, safeguard the Great Lakes and combat and prepare for the climate crisis.

But let’s not forget the top of the ticket: Governor Gretchen Whitmer, Attorney General Dana Nessel, and Michigan Secretary of State Jocelyn Benson have each been champions for our environment and democracy. They are in tough re-election battles against some of the most divisive and extreme candidates we’ve seen in Michigan. From the Governor’s MI Clean Water plan to the AG’s lawsuits against 3M and other corporate polluters to the Secretary’s tireless commitment to ensuring free and fair elections, Michigan has some of the very best leading our state.

After redistricting in 2021, the battle for control of Michigan’s two legislative chambers is one to watch. Democrats have an opportunity to pick up seats in both chambers, potentially even flipping control in the MI Senate. Clean Water Action has endorsed dozens of candidates for office — each of whom will be a champion for our water, climate and democracy should they be elected in November.

The time is now to register, if you haven’t already. Register, check your status, and request an absentee ballot at michigan.gov/vote. After October 24th, contact your local clerk. For voting infromation and questions about the upcoming election on Tuesday, November 8th, please visit MichiganVoting.org or call (866) OUR-VOTE for non-parisan voter assistance. For a full listing of Clean Water Action’s endorsements, please visit cleanwater.org/voteMI.

The Oakland County Board of Commissioners recently voted 13-7 to put a county transit millage on the November ballot. This millage would be for creating a Countywide transit system. The county is currently served by a number of local transit services that are often not connected and have areas that are not served at all. This patchwork is because the county typically has allowed municipalities in the county to have an opt-out clause in similar millages. Smaller, less urbanized townships in the county have done so a number of times. By creating a single, more responsive system in the county, residents can connect across the local economy with fewer inefficiencies, while also building environmentally savvy transit for the county. 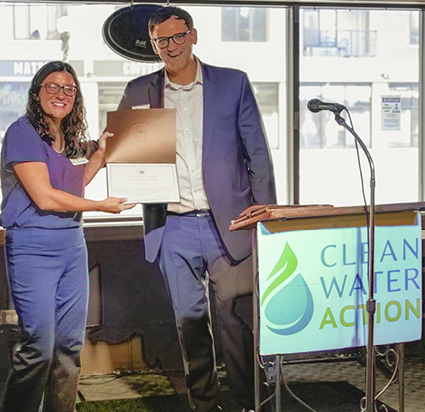 DTE is one of Michigan’s largest energy producers and covers a massive portion of the state’s population with their electric grid. Like most investor owned utilities, DTE has routinely slowed the transition to renewable sources of energy in our state, while greenwashing their own image. DTE has enforced a cap on how much solar energy a ratepayer can return to their bill for a credit, and even now, while facing a climate emergency, DTE only has goals of transitioning by 2050. If DTE wants to control Michigander’s power, a public resource, they will need to do better.

Michiganders already pay the highest electric rates in the Midwest and suffer some of the worst power outages. Just last month, DTE confirmed that about 550,000 customers were without power after a series of storms hit the area. For years, DTE has failed to upgrade and maintain our state’s failing electric infrastructure while spending millions to ensure our regulators and lawmakers work for them instead of us. This is why cities like Ann Arbor and Highland Park are looking for alternatives to DTE’s investor owned monopoly.

In both communities, small groups of local organizers have been spreading the word that DTE does not have to be the only game in town. Ann Arbor for Public Power is a coalition of local residents and organizations working to create a municipal utility for the purpose of generating power for the city of Ann Arbor and surrounding areas. The process is called municipalization and it’s not new.

Used as a way to electrify rural areas and in some places to cut costs, the process of incorporating a not for profit power utility is something that is not only allotted by the Michigan Constitution, but has already taken place in over 40 municipalities across the state dating as far back as 1896. The new wellspring of support for municipalization is being born with the transition to a greener economy in mind.

The reason for this is that a municipal power utility democratizes power, a basic need in our modern society. It takes the power from big companies, whose only interest is to large investors, rather than their ratepayers who suffer power outages and neglected infrastructure. Instead, it invests that power with a local company run on behalf of the city, like a water utility. That means a more responsive power company that’s not tied to investor returns and can make long term decisions for the energy needs of their community. And most important to many residents, that typically means fewer power outages and lower rates.

▲  A packed room of ratepayers and stakeholders came out on August 22nd, 2022 to tell the Michigan Public Service Commission not to approve DTE’s proposed 8.8% rate hike.

Michigan residents have another chance to provide comments about the Line 5 tunnel now through October 14th. The US Army Corps of Engineers announced last year that they would be conducting an Environmental Impact Statement (EIS) on the tunnel proposal. Taking public comments on what the scope of their review ought to be is the first step in this process. A public comment hearing was held in-person on September 8th at Little Bear East Arena in St. Ignace. Written comments can still be submitted here. Below are some of the key points that we think must be included in the Army Corps review:

— Full Alternatives Analysis: Enbridge’s own expert witness is on  court record claiming that price impacts from shutting down Line 5 would be minimal and supply disruptions would be non-existent. This pipeline is not necessary, and is operating illegally across Bad River Band territory and operating in Michigan without a valid easement. Therefore, the Corps’ alternatives analysis must include a broad array of alternatives, including existing capacity in other pipelines supplemented with truck and rail options, and must not be limited to only evaluating the existing Line 5 pipeline vs the tunnel proposal.

— Broad cumulative impacts assessment, including climate impacts: All climate impacts as well as impacts to indigenous communities and cultural sites must be included. Further, the proposed reroute of Line 5 in Wisconsin must be included to avoid improper segmentation of the project, which would allow Enbridge to escape a full review of cumulative impacts.

▶ TAKE ACTION: Submit your own comment to the Army Corps of Engineers today!