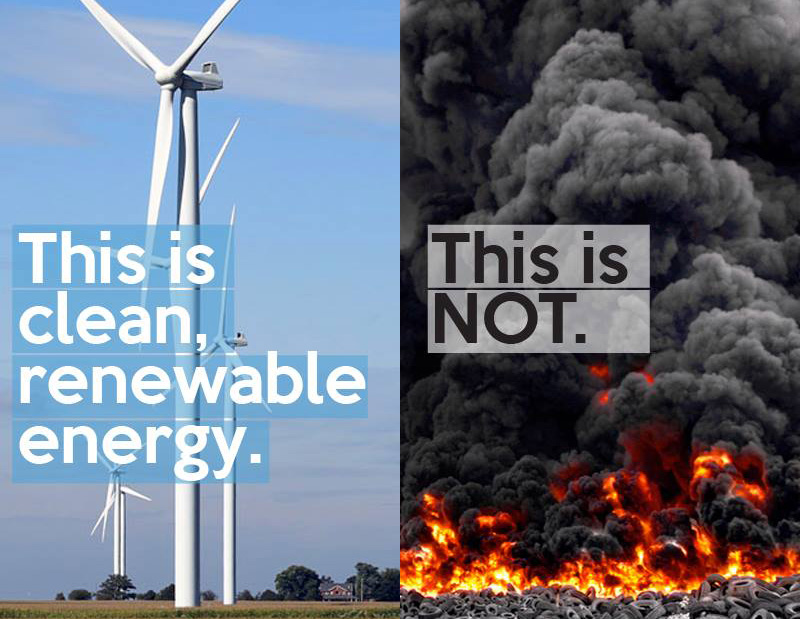 This post originally appeared on Eclectablog You know that warm, cozy feeling you get from seeing black toxic plumes of smoke billowing up from a pile of burning hazardous rubbish and industrial waste? (No, I didn’t think so.) Well, earlier this month Republican State Representative Aric Nesbitt introduced an eight-bill package that redefine burning old tires as “renewable energy”. (Yes, you read that right.)

As it is, Michigan utilities must generate 10% of the state’s energy from renewable sources. So, instead of arguing against that, the bills simply redefine the term “renewable energy” and would actually allow power generated by burning dirty old tires and other hazardous solid industrial waste — as well as animal waste and sewer sludge — to be counted toward that 10% goal, calling that “clean energy”. (This, of course, ignores the number of toxic substances released into the air by incinerating this filthy waste, and all the related health ramifications that go along with it.)

Nesbitt’s legislation would repeal Michigan’s energy efficiency laws — laws that all parties agree save money, reduce waste, and benefit the environment — which currently require utilities to design programs that will reduce energy use by 1% annually – and Nesbit thinks that 1%, coming in sharply above NOTHING, is just too, too much. I generally think that anyone who would actually classify burning toxic garbage as clean energy probably wouldn’t understand the arguments explaining why burning toxic garbage is not clean energy. Either they just don’t get it — being anti-science, climate change-deniers for whom, in all fairness, it’s got to be to hard grasp the concept of melting ice caps while still believing the world is flat — or they just don’t care. Though both are unacceptable, sheer ignorance can at least be pitied. But being in the pockets of the shamelessly greedy and power-hungry corporate polluters who are hell-bent on undermining the common sense standards of our great state, all to add more loot to their already bulging pocketbooks, is enough to fill you with an a new-and-improved disgust for these shameless gluttons at the trough. Well, I hope you’re sitting down, because there’s something very sinister lurking in the shadows of crooked politics. As you may not have already known, Aric Nesbitt is a state chairman for the American Legislative Exchange Council (ALEC), a national conservative organization of lawmakers and businesses that meets in secret to devise anti-environmental “model bills” to pass through state legislatures. National and international coal, oil and gas companies like Exxon, Peabody Coal, and Chevron—and the infamous Koch Industries account for one-third of ALEC’s business funders. And Nesbitt’s pack of rancid bills is eerily similar in design to that of the Electricity Freedom Act (EFA) of 2013 — a shady bit of skullduggery, presented by ALEC – with a nice-sounding, feel-good name designed to make people think they’re getting a good deal. ALEC had repackaged this despicable EFA in slightly varying forms to 19 statehouses across the country, to roll back, or downright eliminate, the energy efficiency standards in those states. Thankfully, the EFA was exposed for what it was: the Big, Bad ALEC dressed in electricity freedom-loving clothing – and it rightfully met with distaste on both sides of the political aisle. Hoping that 20 times is the charm, ALEC is at it again, with their latest bought-and-paid for salesman, State Rep. Aric Nesbitt. But there is real hope, with 95% of people in the Midwest in support of increasing the use of energy efficiency as a renewable energy source, the tide is turning in the favor of a cleaner, renewable future! [Graphic by Progress Michigan, used with permission.]