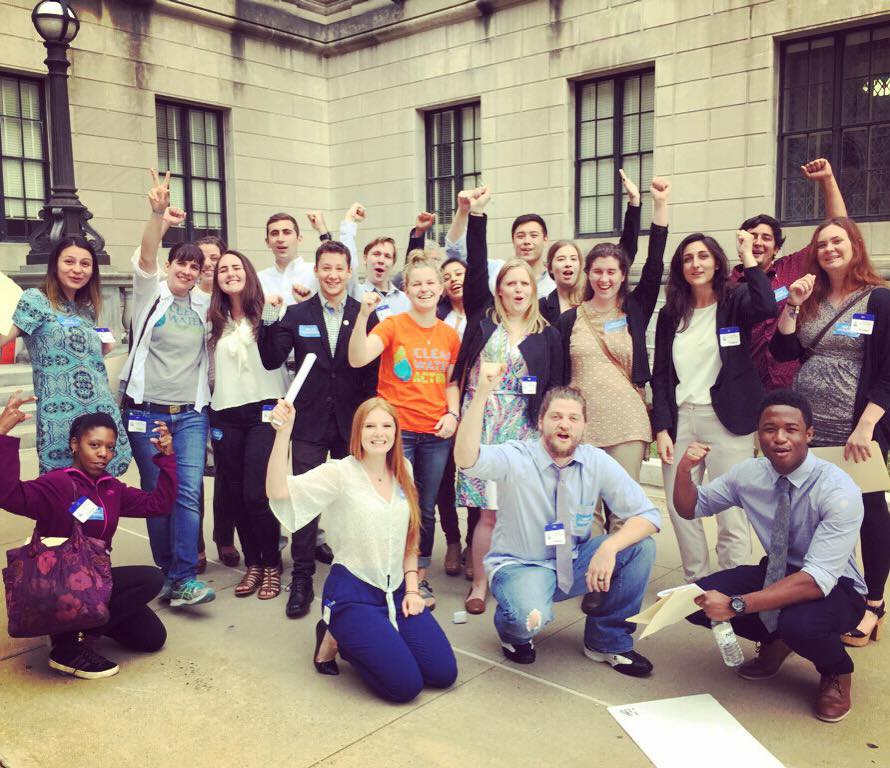 It's not all a House of Cards Last week, I traveled from our Montclair office to the Statehouse in Trenton for a Clean Water Lobby Day. On the way there, the scene that played in my mind mirrored one from House of Cards. I thought of Kevin Spacey rolling his eyes before he opened the door to the hallway and the lobbyists dying of anticipation waiting on the other side of the door. The whole scene was set to some kind of instrumental beat in tune with the fast paced heartbeat of the lobbyists, and the conversation between legislators and lobbyists I imagined just short of fifteen seconds. The reality of the day was completely different than the cliché scene in my head.

When I arrived, I joined a group of 30 Clean Water Action organizers to attend district meetings, committee hearings, lobby legislators and hold a press conference with legislative leaders on the State House steps. My first lobbying experience involved waiting outside of Assemblywoman Sheila Oliver’s office to try to catch her after a 10:30 a.m. meeting. Twenty minutes later, she turned the corner into the hallway impeccably dressed and began apologizing for the traffic jam that had kept us waiting. She greeted the activists she knew with a hug, took a picture with the group, and then invited our Clean Water group into her office.

We piled into the office and each of us shook her hand and explained who we were and our connection to the 34th district. My introduction went something like: “Hi my name is Alena Gallagher and I work with Clean Water Action in Montclair.” Kerry, our field manager and long time organizer, took the lead and explained that we were there to talk about the bill SCR66 that seeks to veto Governor Christie’s Flood Hazard Rule rollbacks. Kerry explained how important this bill was not only to Clean Water Action, but also to the residents of New Jersey.

What we brought to the conversation as canvassers are the first hand conversations we have everyday with New Jersey residents who are very concerned about their water. People who were frustrated and angry that our politicians knowingly let traces of arsenic, nitrate, and even lead flow through the water fountains of New Jersey public schools with little to no proactive action of creating a plan for new infrastructure. Mothers who don’t let their children drink the water at school, and only feel comfortable with their families drinking bottled water (which has also proven not to be 100 percent safe).

Assemblywoman Oliver listened intently to these stories and responded with her own concerns about our water infrastructure, noting that some of the water pipes in our state are made of wood and date back to Abraham Lincoln’s presidency. I feel lucky that I was able to have this intimate interaction with Assemblywoman Oliver. Instead of the fast walking and talking conversation I anticipated I would have, she gave us the time and attention this important issue deserves. Some of the best memories of the day were the candid and fun moments. We spent some time exploring the State House, enjoyed free lobby day pastries and cuddling with the Great Dane therapy dogs representing the animal right’s activists. Giselle, another Clean Water Action canvasser, was even featured on her legislator's Instagram. In the end, Lobby Day was nothing like House of Cards and more like How I Met Your Mother.

I know that every interaction with a legislator isn't exactly like this, you may find yourself running down the halls for your 15 second conversation. Regardless, I encourage every resident of New Jersey to spend a day lobbying in Trenton. To learn more about our campaign to protect clean water, visit our website and be sure to contact your own legislators about issues that you care about most. You never know what kind of response you'll get.