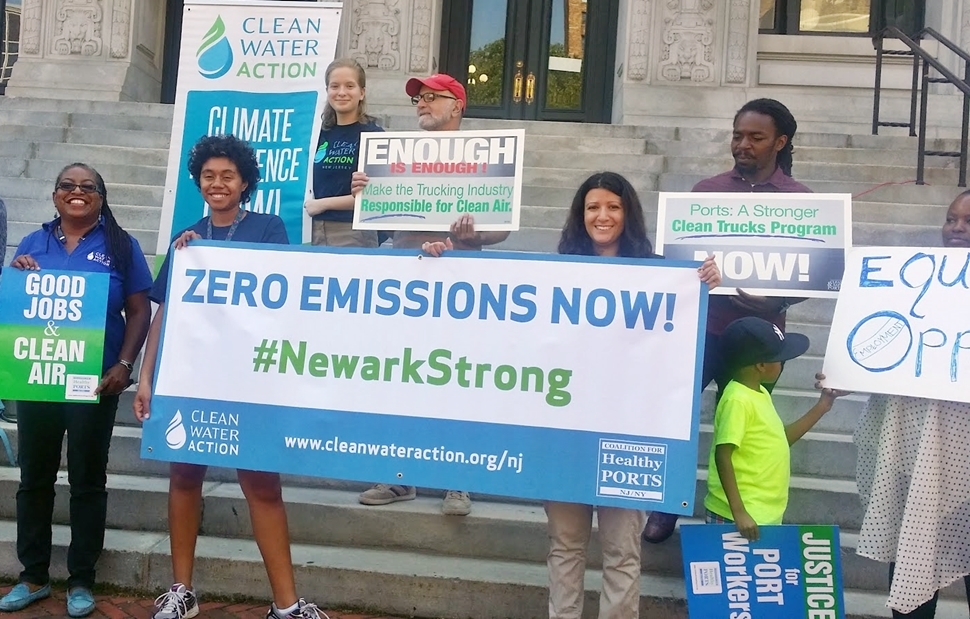 Yesterday, Clean Water Action joined the Ironbound Community Corporation (ICC) and City of Newark Mayor Ras Baraka to lead a motorcade rally through the port followed by a rally on the steps of City Hall to demand the Port Authority of NY/NJ ensure clean air and good jobs now. Clean Water Action and ICC are part of the Coalition for Healthy Ports NY NJ, a broad coalition of environmental, labor, faith, community, environmental justice and business organizations that seek to create sustainable ports in New York and New Jersey.

Together with Union leaders, Clergy, environmentalists and community activists, we pressed the Port Authority to reinstate its scheduled ban on trucks with pre-2007 engines (similar to a ban at the nation’s largest port complex in Los Angeles and Long Beach, CA).

"More residents in the City of Newark die of respiratory illnesses and asthma attacks than homicides, but if someone got shot on the street today that's all you would hear about," said Kim Gaddy, Environmental Justice Organizer for Clean Water Action at the rally. "We have 7,000 trucks that travel throughout the port every day...3,500 of those stay in the East and South Ward spewing diesel emissions which is a known carcinogen. We can't afford to have our children, our elderly and family members suffer from this pollution, especially when there's a remedy. Zero Emissions Now calls for the immediate removal of those polluting trucks and equipment at the ports and the Port Authority has the money to do it."

In January 2016, PANYNJ rescinded its announced plan to ban older trucks from entering the port starting January 1, 2017 on the grounds that it would cause the port to close. CHP and its allies have noted that NYNJ shippers and trucking companies would conform to the new rule as they did 10 years ago on the West Coast when they understood that the port authority out there would not back down. Lower and near-zero emission truck technologies have been proven effective, are readily available and in use wherever required by port governing bodies. There is no excuse for the PANYNJ’s reneging on its prior commitments to significantly clean the air and improve public health conditions in the NYNJ port region.

"The port of Newark and Elizabeth is the second largest port in terms of volume in the nation," said Mayor Baraka. "Over 20 percent of America's GDP is produced right here in Newark and Elizabeth at the port which makes it an incredible asset to not just this region but the entire nation. We have a jewel in our backyard that many of us have ignored for very long. Our children are dying in the streets for petty money when people are making real money at the Port Authority and we've ignored it all of our lives."

"On a normal day in the East and South Wards in Newark, we see and hear hundreds of trains and planes, and thousands of trucks," said Melissa Miles, Environmental Justice Organizer, Ironbound Community Corporation. "But the invisible nuisance is the particulate matter created by burning diesel fuel using outdated technology. It’s slowly killing us. We want the Port Authority to divest from fossil fuels and invest in our community now in the form of good jobs for Newarkers, correct classification for truckers and benefits for our community.”

The Coalition for Healthy Ports has also joined the Moving Forward Network, a coalition of environmental groups across the country, in calling on the U.S. Environmental Protection Agency (EPA) to clean our air, protect our planet from global climate change and advance environmental justice by reducing air pollution and promoting zero emissions technologies at every port, rail yard, distribution center and busy truck corridor across the country.

Diesel emissions are linked to asthma, cancer, and other health disorders, causing 21,000 premature deaths each year. Families that live by busy diesel truck corridors and port communities are often hit the hardest. It's time to demand #ZeroEmissionsNow - join our campaign at www.coalitionforhealthyports.org or contact njcwa@cleanwater.org to get involved.