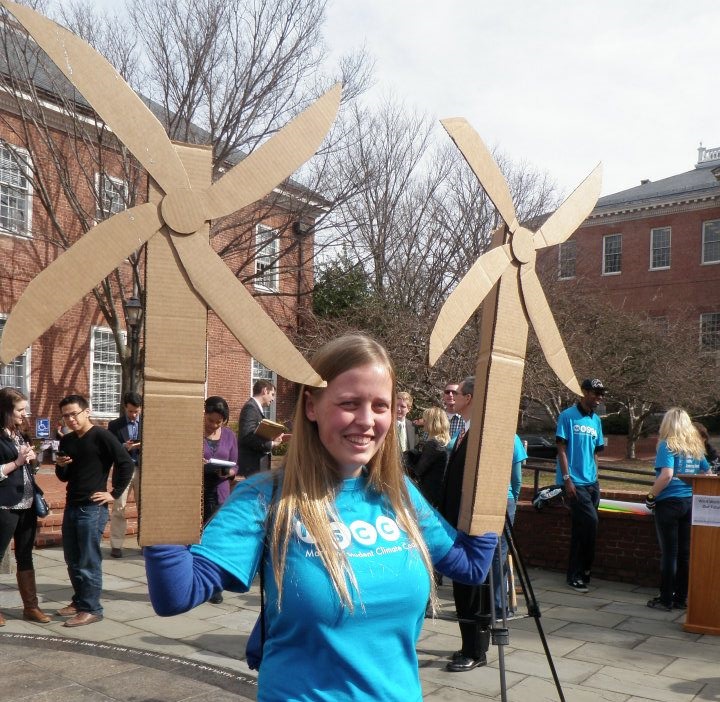 Five years ago, as a student at St. Mary's College of Maryland, I spent much of March calling legislators and traveling back and forth from St. Mary's County to Annapolis to rally for the Maryland Offshore Wind Act - cardboard turbines for arms and all.  Environmentalists and the wind industry had been working for years to legalize wind power off the coast of Maryland, a renewable energy source that could power 500,000 homes.  In addition to legalizing offshore wind, it created a framework to ensure that Maryland small businesses, especially minority-owned businesses, would be a part of delivering wind power to people's homes.  My efforts and the efforts of other students in the Maryland Student Climate Coalition didn't find success that year, but one year later, the law passed, creating a framework for developing wind farms 17 miles off the coast of Ocean City and powering hundreds of thousands of homes with clean, green energy.  Now, Maryland is poised to become a leader in offshore wind across the whole United States - but we need to act now to make that dream a reality.

The Public Service Commission is currenty weighing bids to finally construct wind turbines off the coast of Maryland.   The turbines would go on the outer continental shelf, between 10 and 30 miles off the coast of Maryland. Both of the proposed projects are 'below the horizon' – farther than the eye can see due to the curvature of the earth – and wouldn't be visible from the Eastern Shore.  Two companies have put in bids to construct these turbines.  Deepwater Wind wants to build 15 turbines, which would produce 120 megawatts of power.   It has already constructed a wind farm off the coast of Rhode Island, and promises that its Maryland project could be operational as soon as 2022.  US Wind, Inc, is a Baltimore-based company that plans to construct 187 turbines over 80,000 acres.  This would become the largest offshore wind farm in the United States, meeting 100% of Maryland's offshore wind energy goals and producing 750 megawatts of power - enough for 500,00 homes.  And they have plans to bring offshore wind turbine manufacturing to Baltimore and the Eastern Shore, making Maryland the first mover in the US-based offshore wind industry and a hub for offshore wind development up and down the East Coast.

Building offshore wind will help Maryland move away from fossil fuels, keep pollution out of our air and water, stop climate change, and even bring thousands of high-paying manufacturing jobs to the Eastern Shore and the Port of Baltimore.  Over the next few weeks, the Maryland Public Service Commission will be taking public comments on these proposals, and they need to hear that Marylanders want a clean energy future.  Submit your comment today - and if you're able, join clean energy advocates on Saturday 3/25 in Berlin or Thursday 3/30 in Annapolis to deliver your comments in person.

In this moment when news from Washington, DC, is so frustrating and frightening, I'm excited to have an attainable clean energy vision for Maryland - one in which Maryland leads the country in fighting climate change, creating local economies, and creating 21st-century manufacturing jobs for residents of Baltimore and the Eastern Shore.  If this is exciting for you too, I hope you'll submit comments in support of this project to the Public Service Commission.