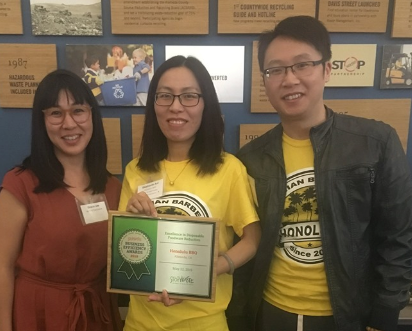 As a cuisine, Hawaiian Barbeque often involves a lot of disposables food-service items; at the outset, Alameda’s Honolulu BBQ was no exception. When Stephanie Aut and her husband Kevin Chow opened Honolulu BBQ in 2018, they didn’t know about Alameda’s foodware ordinance, which requires compostable, fiber based foodware, makes straws available only upon request, and encourages reusables for onsite dining. Accordingly, they did what many businesses do--they bought the most affordable disposables they could find. Before ReThink Disposable certification, every Honolulu BBQ menu item had its own unique single-use take out container, and a typical meal for one person resulted in seven to ten pieces of trash.

When Grace Lee from ReThink Disposable first talked with Stephanie about transitioning to reusables, the prospect seemed daunting. Grace invited Stephanie to shop for reusables on her laptop, offered free technical assistance to help identify durable replacements for all the single use disposable food ware items she needed to replace, and prepared an annual cost projection so Stephanie could envision yearly savings she would accrue by investing in reusables. As of this year, Honolulu BBQ has successfully transitioned to all reusable food ware for onsite dining, which has reduced or eliminated 14 different types of disposable foodware items while streamlining operations.

As a result of their food-packaging changes, Honolulu BBQ now prevents over 100,000 disposable foodware items and over 2,000 pounds of waste every year, which saves them over 3,000 dollars annually.

Stephanie’s openness to dramatically rethinking the workings of her restaurant made the transition a success.

Although one of her employees was adamant about her refusal to wash dishes, Stephanie was willing to step in to take care of this task. She took initiative at various stages of the process, including by ordering all of the recommended reusable foodware items herself and reaching out to a local Pepsi representative to get 20-ounce durable beverage tumblers for free. Stephanie also recently contracted with a mechanized dishwasher rental service and is considering offering a discount for customers who bring their own takeout containers.

The changes at this small, local, woman-owned eatery are worthy of recognition. Honolulu BBQ was one of only six businesses in Alameda County to win a StopWaste Business Efficiency Award. It is our hope that Honolulu BBQ’s transformation will further prove that zero-packaging and a successful restaurant go hand in hand.