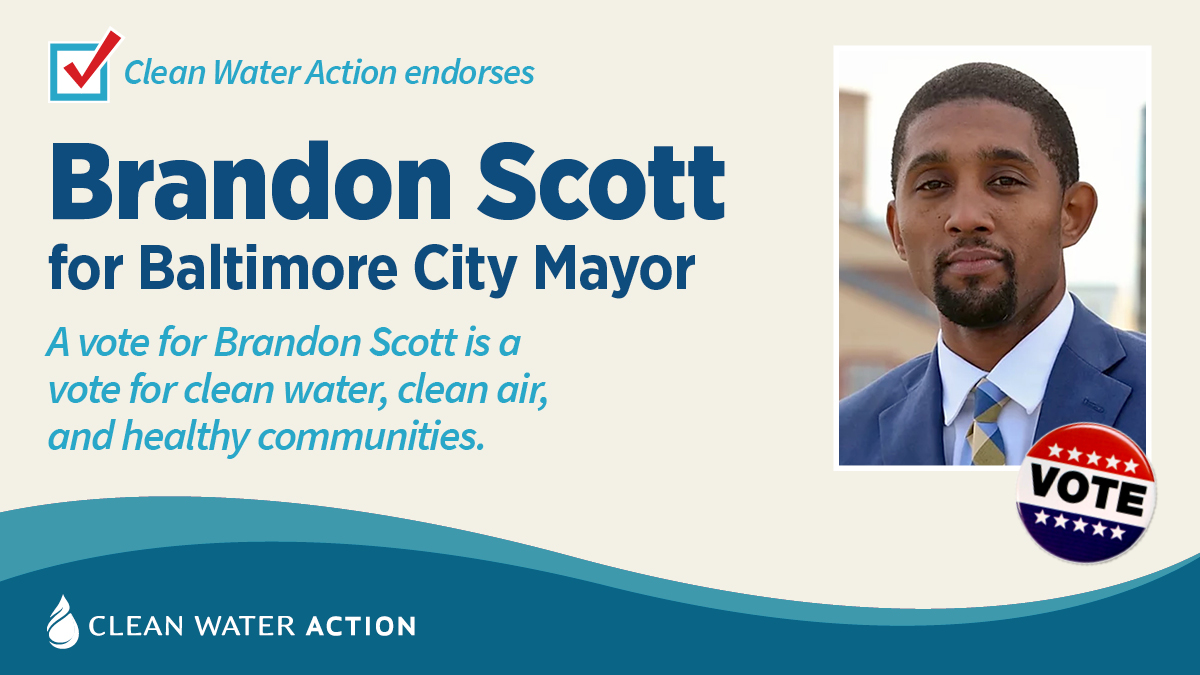 The future of Baltimore City will be decided in the next few weeks, as voters receive their ballots by mail and fill them out at home - for most of us, for the first time. (As you may have seen in the news, mailing ballots to Baltimore City was significantly delayed. If you haven't received yours by the weekend, you can download and print a ballot here.)  With so much riding on the results of this election, I want to take a few moments to tell you who Clean Water Action has endorsed for Mayor of Baltimore City, and why.

During his time on the Council, Scott has established a strong record of support for environmental issues, voting for the Crude Oil Terminal Prohibition, the Plastic Bag Ban, and every effort to transition the city away from BRESCO and toward zero waste. He led the charge to create an Equity Fund (approved by city voters in the 2018 election) and require city agencies to study whether they engage in discriminatory practices. He's strongly supported efforts to investigate sewage basement backups, a problem he knows well from his own family's experience in northwest Baltimore.

Then, last year, when the rest of the City Council elected him Council President in the wake of former Mayor Pugh's resignation, Scott lost no time in advancing the reform agenda that's necessary to solve the most difficult environmental problems we face. He took the opportunity to restructure the City Council, creating new committees on Health, Transportation, Cybersecurity, Equity & Structure, and Legislative Investigations - the latter having the power to compel testimony and issue subpoenas for information from city departments. He became the lead champion for the Water Accountability and Equity Act, going to the mat over DPW opposition to make the city's water billing process more transparent and accessible. And he's championed a number of charter amendments to improve how city government is structured, which he promises to advance as Mayor, even though they would distribute powers the Mayor holds more widely - because it's the right thing to do for our city.

Brandon Scott is running for mayor to bring the structural reform to city government we need to solve the toughest environmental justice, public health, and climate crisis challenges we face, and he's the candidate with the city government experience, proven track record, and city-wide credibility to get it done. That's why Clean Water Action has endorsed his campaign, and as a city resident myself, I hope he will earn your vote when your ballot comes.

One more thing: can you help us spread the word? As normal campaign activities are suspended - especially the personal door-to-door outreach that Clean Water Action has always prioritized - many voters across the city are undecided, and it's harder than ever to get timely, accurate information. But you can help us fix that - without leaving your own home! - by joining a virtual phonebank party: