Heavy rainfall stresses all of our infrastructure: flooded transportation systems, leaking houses developing mold, inundated drinking water sources full of polluted runoff, and sewage systems letting rainwater leak in and sewage flow out. In Baltimore City, aged sewage infrastructure doesn't only cause millions of gallons of sewage to flood urban streams, or sinkholes to swallow city streets. It also causes toxic sewage to back up into residents' homes, putting their health and financial security in danger. With more than 5,000 building backups of raw sewage reported every year, but no direct emergency response and underutilized programs to assist with the cost, Baltimore City needs to do more to help residents with this persistent public health threat and financial burden.

Has a building backup of sewage happened in your home, church, or business? Let us know.

Baltimore City's sewage system was designed with dozens of Sanitary Sewer Overflow Structures: intentional release valves that allowed sewage to overflow into streams, rather than streets or people's basements. Although this was a best practice in the early 1900s, using streams as open sewer pipes is a significant public health and environmental threat and in violation of the Clean Water Act In 2002, Baltimore City finalized a Consent Decree, a legally-binding agreement with EPA and MDE outlining how it would end the chronic sewage overflows into local streams that were fouling the Inner Harbor, contributing to overloads of key pollutants, and putting people in danger of contacting hazardous fecal bacteria by 2016.

Between 2002 and 2016, Baltimore City completed less than half the work that was described in the Consent Decree - but backups of sewage into homes in Baltimore grew from a minor problem to a major hazard. According to an investigation by the Baltimore Sun, DPW crews responded to 622 sewage backups in their homes in 2004; by 2015, there were nearly 5,000. And although sewage backups can be caused by a variety of problems - from tree roots growing into a lateral sewer line, to individuals flushing inappropriate materials down the drain - many are caused by capacity issues, maintenance issues, or stormwater flooding into the sewer line through cracks and overwhelming it. (Read an analysis by CityLab here.) Closing sites where sewage overflowed into local streams even contributed to backups elsewhere: as DPW's General Counsel stated to WYPR in 2015, "when we closed those other 60 overflows that actually increased the number of basement backups that we saw in the city. Again, because the sewage has to go somewhere."

Many city residents filed legal claims with the city to recoup their damages - which sometimes topped tens of thousands of dollars. (Click here for application forms for the city's claims process.) But without a deadline for response by the city, many of those applications sat in limbo for years. And when residents filed legal claims with Baltimore City to recoup their costs - sometimes tens of thousands of dollars - their applications frequently sat unresolved for years or were denied.

READ MORE: Stopping the Flood Beneath Baltimore's Streets: The city's failure to comply with a federal consent decree, and how delay harms homeowners and the Inner Harbor (Environmental Integrity Project, December 2015). This report, compiled at the close of the first Consent Decree, outlines the decades of delay that caused the city to complete only half of the repairs required by the deadline of January 1, 2016, and how the repairs that were completed contributed to the massive increase in sewage backups over the same period.

From July 1, 2012 to July 1, 2015, Baltimore’s Law Department received 413 claims from homeowners about damage to their properties from sewage overflows. The claims represented only a portion of the overflow incidents experienced by city residents, however. This is because many people simply notify Baltimore through the city’s 311 complaint hotline and are not provided information on how to submit claims, or they are discouraged from submitting claims because the city has either denied or failed to respond to past claims submitted by residents. Of the 413 claims that were submitted by city residents over the last three years, only 38 claims have been paid by the city (9%). Meanwhile, Baltimore has denied 223 of the claims submitted (54%) while 152 claims remain open and unpaid (37%). In addition, 122 of these open claims are more than one year old. 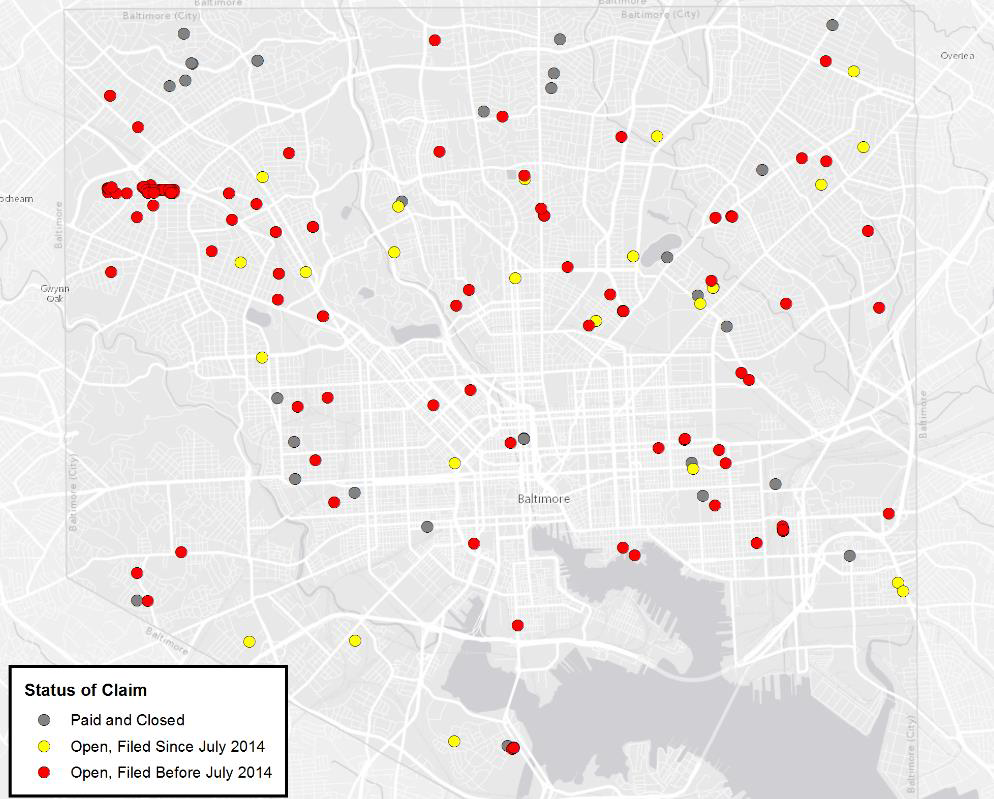 As the first Consent Decree period came to a close, residents who had experienced sewer backups spoke out and organized to make change - and won.

The Modified Consent Decree requires Baltimore City to complete an initial phase of urgent repairs by 2021, and eliminate remaining sources of sewage overflows by 2030. EPA and MDE for the first time also required the City to address the problem of building backups (defined as when wastewater or sewage is released or backs up into a building Caused by blockages, flow conditions, or malfunctions in the city's sewage collection system, but not if the blockage, flow conditions, or malfunctions are caused by private lateral or other piping systems not owned or controlled by the city). This agreement outlined several requirements for the city to address basement backups:

The Modified Consent Decree requires DPW to report its progress every three months on eliminating the 15 remaining Sanitary Sewer Overflow Structures and conducting related repair, maintenance, and programmatic work outlined in the agreement. Each report can be downloaded here.

Each quarterly report includes a chart of the building backups reported to 311 during that period, whether they were associated with wet weather, and whether the household filed a claim for damages.

Because these figures are generated from 311 calls for service, we know that these figures do not reflect the total number of sewer backups experienced by Baltimore City households. Consistently, DPW is determining that less than a third of sewer backups are caused by wet weather - making most households ineligible for the Expedited Reimbursement Program. 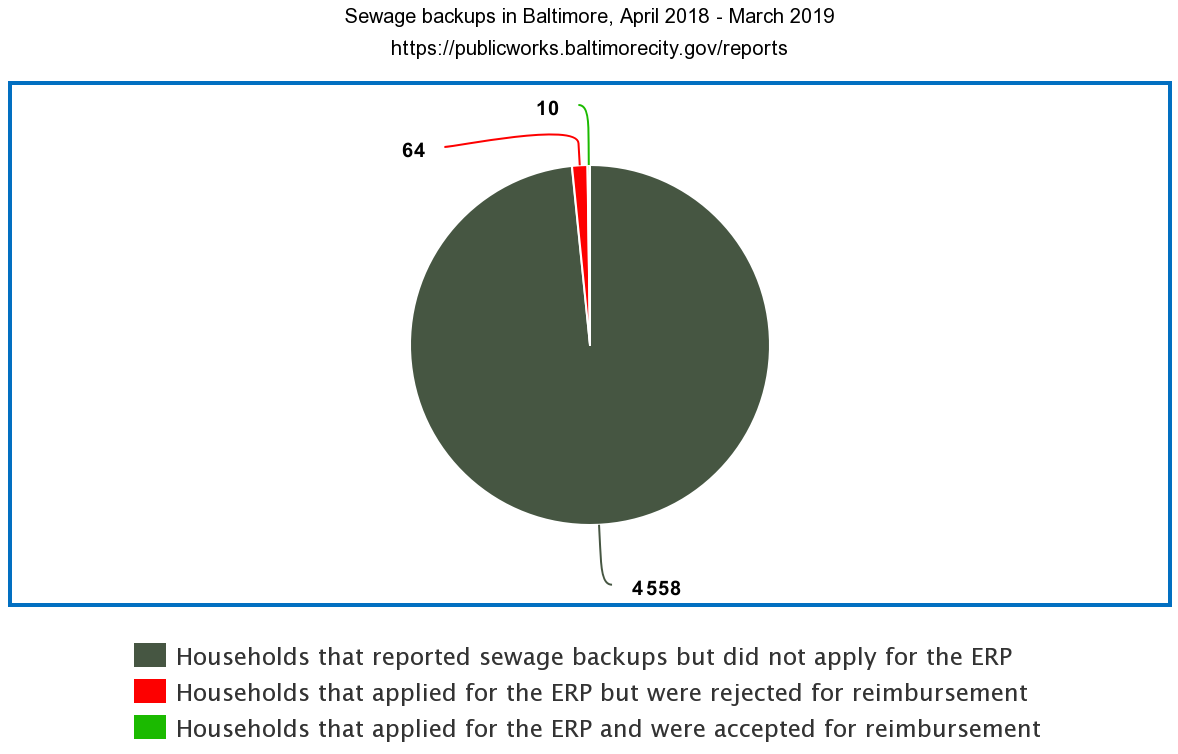 READ MORE: Residential Sewage Backups in Baltimore City, Fiscal Year 2018 (Faith C. Ezell, Master of Health Science Candidate, Johns Hopkins Bloomberg School of Public Health). This master's thesis, written in collaboration with Clean Water Action and the Environmental Integrity Project, outlines the history of Baltimore's sewage system, negative health impacts of exposure to sewage, and the increasing risk of extreme rainstorms due to climate change. By analyzing and mapping data released in the first four Modified Consent Decree Quarterly Reports, covering October 2017 - September 2018, the report demonstrates that operations and maintenance work reported by DPW does not necessarily align with where basement backups are happening most frequently, that most basement backup occurances are not eligible for reimbursement under the Expedited Reimbursement Program as it is currently set up, and that sewage backups are more likely to occur in neighborhoods with a higher proportion of African American residents in Baltimore City. 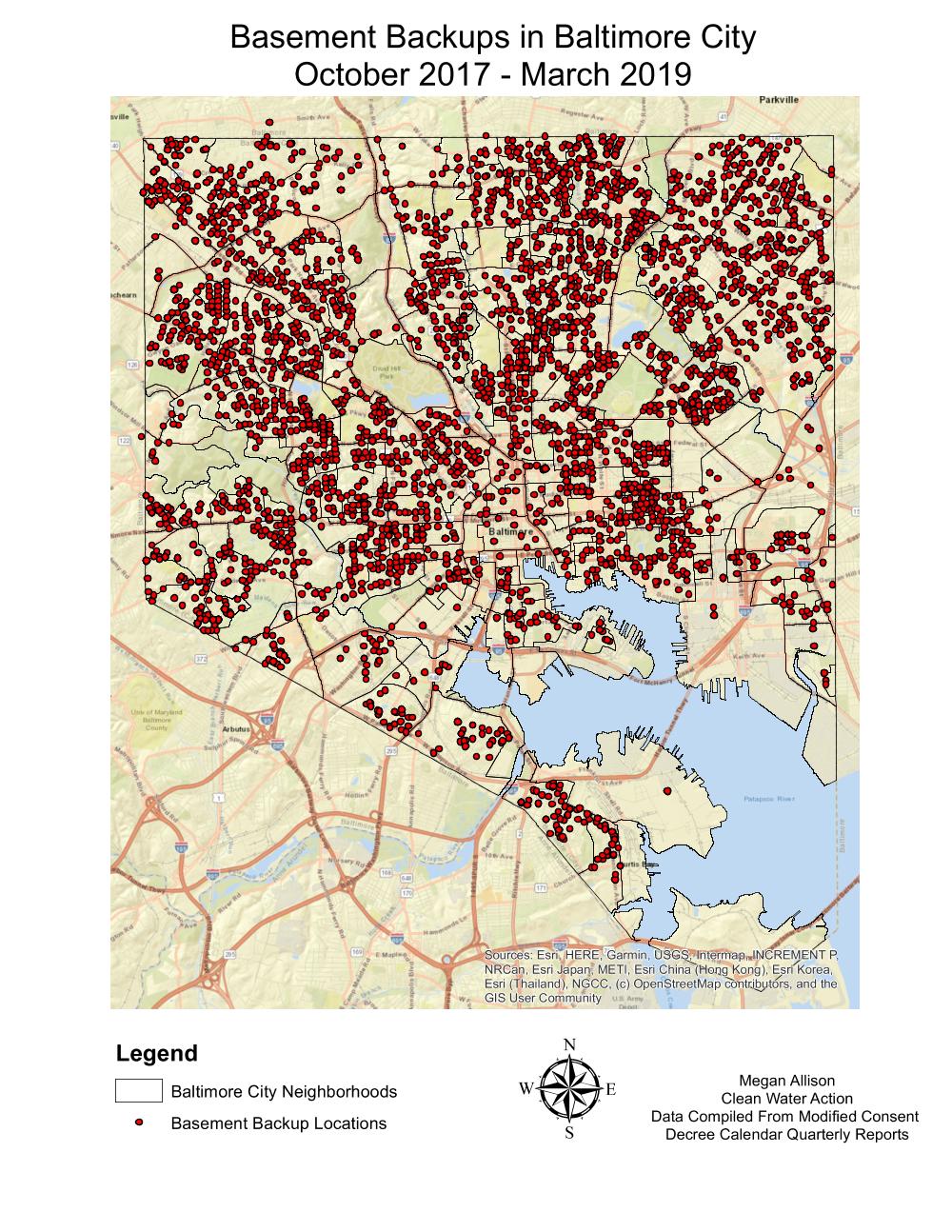 What you can do if a basement sewage back-up happens to you: